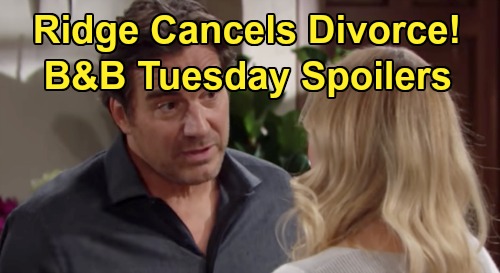 The Bold and the Beautiful spoilers for Tuesday, December 31, tease that the action’s really heating up on the CBS soap. But before we get to that, we have a quick programming note. B&B will air a new episode on Tuesday on the east coast, whereas on the west coast, the show will be preempted for The Sun Bowl. Then on Wednesday, January 1st, an encore episode will air on the east coast, while the new episode from Tuesday, December 31st will air on the west coast.

So, depending on where you live, you’ll see the next new episode of B&B on either Tuesday or Wednesday. On that episode, Thomas Forrester (Matthew Atkinson) will really ramp up his plan to win Hope Logan (Annika Noelle). As B&B viewers know, he’s just romanced Zoe Buckingham (Kiara Barnes) during a hot date at the Forrester mansion. The two had the whole place to themselves, and Thomas wined and dined Zoe in grand style.

After their dinner, which was complete with champagne and candles, Thomas suggested that he and Zoe go upstairs, which they did. According to B&B spoilers, the two will make love, and they’ll wake up the next morning together. Of course, we should note that Zoe’s supposed to be on a mission for Liam Spencer (Scott Clifton) to find out what Thomas’s intentions are for Hope. Liam thinks that Thomas is still obsessed with Hope and that he’s manipulating her into thinking he’s over her.

Of course, Liam’s 100% right about that, but Thomas is determined to prove that he’s over Hope, so that Hope believes he’s moved on. This is critical for Thomas, since his ability to work as the designer on Hope For The Future depends on Hope thinking that he’s moved on with Zoe. If Hope thought that Thomas still wanted her, there’s no way she’d let him anywhere near her, and Thomas knows it.

So, now that Zoe and Thomas will have made love, they’ll be closer than ever. In fact, B&B spoilers indicate that Thomas will even invite Zoe to the Forrester holiday get-together as his date, so he’ll really be pushing his plan forward. He’ll want everyone – including Zoe – to think that they’re officially dating, and that he only has eyes for her.

Of course, Liam and Brooke Forrester (Katherine Kelly Lang) are still going to be skeptical of Thomas’ motives, even after words gets around that he and Zoe are a full-fledged couple. Neither Liam nor Brooke would put it past Thomas to escalate things with Zoe as part of a big ruse – which is exactly what’s going on.

Meanwhile, Brooke and Ridge Forrester (Thorsten Kaye) will spend some time together. These two have had a terrible time lately, as every conversation they have tends to circle back to their disagreement over Thomas and end in discord. As B&B viewers know, Ridge has possession of the divorce papers, which both he and Brooke have signed. But Ridge hasn’t filed the papers yet, as he’s hoping for a reconciliation.

It looks like “Bridge” will take some time to reminisce and think back over their fondest memories. B&B viewers should be in for a treat, as we’ll likely see some touching flashbacks. And according to B&B spoilers, Ridge will ask Brooke to spend the holidays with the Forresters, although Brooke will probably be hesitant to do so, given that it will mean spending time with Thomas.

It seems that Brooke and Ridge will also discuss their future, as Ridge will reveal that he hasn’t filed their divorce papers yet. Both he and Brooke will probably profess their love for each other and a strong desire to work through their problems, although there’s simply no way either will budge at this point on their stances on Thomas. However, down the road, look for Ridge to suggest they reconcile after he learns about Thomas and Zoe’s relationship.

For now, though, it looks like “Bridge” will remain in marriage limbo, as they can’t see eye-to-eye on Thomas. Perhaps their walk down memory lane will serve to remind them how much is at stake and how much they both stand to lose if their marriage dissolves.