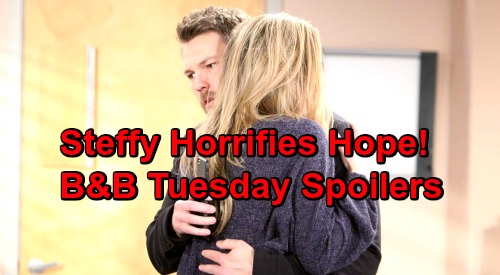 The Bold and the Beautiful spoilers for Tuesday, January 29, tease that Hope Spencer (Annika Noelle) will get some startling news. Liam Spencer (Scott Clifton) will decide that it’s time to tell Hope that Steffy Forrester (Jacqueline MacInnes Wood) is moving ahead with her adoption plans and is adopting a baby girl.

This won’t be news that Hope will immediately be able to comprehend. She’s in the depths of her grief over the loss of Beth Spencer, and the thought of the Forrester family welcoming a new baby that’s not Beth will horrify her. This was supposed to be Hope’s time to bring home a baby, and she’ll now have to face the fact that Steffy will be living her dream instead.

Hope won’t be thrilled about the timing of Steffy’s adoption, and she’ll probably wonder how Steffy can justify doing this so soon after Beth’s death. Hope may feel that Steffy’s being insensitive to her and Liam’s pain, but Liam will explain that an opportunity dropped into Steffy’s lap unexpectedly, and that when she met the baby, she knew it was meant to be.

Of course, Liam will also have to tell Hope that he’s already met the baby that is about to become Phoebe Forrester (Rosalind Aune and Isabella de Armes) and that he agrees with Steffy that this particular baby is the perfect fit for Steffy and Kelly Spencer (Chloe Teperman and Zoe Pennington). Hope may not be entirely understanding about this at first, but it looks like she’ll come around soon enough.

Meanwhile on the new B&B episode on Tuesday, January 29, Florence “Flo” Fulton (Katrina Bowden) will start to really think about what she and Reese Buckingham (Wayne Brady) are doing. She’ll spend some time reflecting on just what Reese has done, including kidnapping a baby, leading its parents to believe it died, and orchestrating an illegal adoption.

These actions will weigh heavily on Flo, and the seriousness of it all will really start to sink in. But she’ll probably remind herself that the safety and well-being of Reese’s daughter Zoe Buckingham (Kiara Barnes) depends on their plan working. If they don’t follow through with the adoption ruse, then Zoe could be hurt or even killed, so she’ll resign herself to continue.