The Bold and the Beautiful Spoilers: Tuesday, July 23 – Liam Asks Wyatt To Question Flo – Thomas Uses Douglas To Get Hope In Bed 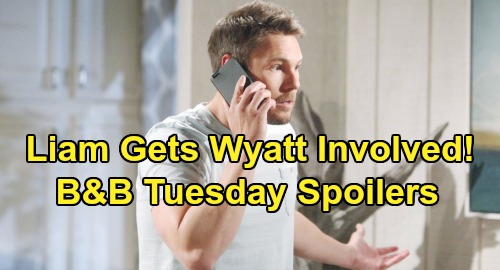 The Bold and the Beautiful spoilers for Tuesday, July 23, tease that Liam Spencer (Scott Clifton) will be on a mission. As B&B viewers know, he’s just overheard Thomas Forrester (Matthew Atkinson) threaten Florence “Flo” Fulton (Katrina Bowden) about a “secret” that he suggested she keep until the day she dies. Liam wasn’t quite sure what he was overhearing, but he knows it’s not good, and it was likely a menacing threat.

On Tuesday’s episode, Liam will stew about what he’s heard. He’ll decide that he needs some assistance in getting to the bottom of what’s going on, so he’ll contact his brother Wyatt Spencer (Darin Brooks). Liam will know that he has to tread carefully here, since Flo and Wyatt are romantically involved. Wyatt really loves Flo, and Liam won’t want to cause trouble for the pair, but he’s got to find out what kind of secret Flo and Thomas are keeping.

Of course, Liam doesn’t know Flo well at all; he just knows her as Phoebe Forrester’s (River Davidson and Madeline Valdez) birth mother. The Bold and the Beautiful spoilers say Liam will be worried that something’s awry with Phoebe, and that this could potentially impact Steffy Forrester’s (Jacqueline MacInnes Wood) adoption of her daughter. But he’ll have no clue how this could involve Thomas and Hope Forrester (Annika Noelle).

Look for Liam to fill Wyatt in on the fact that Thomas and Flo have a secret, and for Wyatt to express completely surprise. Ongoing B&B spoilers indicate that Wyatt will help Liam by subtly quizzing Flo about her background and specifically about her (alleged) pregnancy and Phoebe’s adoption process.

Next, on the new episode of B&B on Tuesday, July 23, Thomas will experience some frustration with his new bride. Now that “Thope” are married, Thomas will be expecting Hope to share his bed, but it looks like Hope will be hesitant. As B&B viewers know, Hope’s just not ready to be intimate with Thomas, and although she’s made that clear to him, he’ll nevertheless resort to some manipulation to get her into his bed.

In a creepy turn of events, Thomas will pressure his son Douglas Forrester (Henry Joseph Samiri) to help him out in his efforts. He’ll get Douglas to urge Hope to spend the night with his Dad, since “mommies and daddies sleep in the same bed.” It’s really unimaginable that Thomas would use his son in this way, but The Bold and the Beautiful spoilers say that Thomas will stoop to this new low.

Viewers will have to tune in to see if Douglas is really able to convince Hope to sleep in Thomas’ bed for the night. Do you think he’ll be successful?