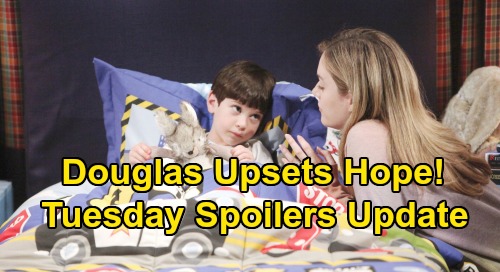 The Bold and the Beautiful (B&B) spoilers update for Tuesday, July 23, tease that Thomas Forrester (Matthew Atkinson) will once again use his young son to his advantage. Douglas Forrester (Henry Joseph Samiri) has become Thomas’ favorite tool in his quest to win Hope Forrester (Annika Noelle) over. He can always count on the boy to follow orders and tug at Hope’s heartstrings.

Thomas will decide to have a conversation with Douglas about parents and their need for alone time. He’ll insist that it helps mommies grow closer to daddies – and can help their own family seem like a regular one sooner. Thomas will point out that Douglas can bring everyone together if he does what he’s told. He’ll push Douglas to suggest a night alone between Mommy Hope and his dad.

Douglas naturally believes whatever Thomas tells him, so he’ll assume this is a normal and beneficial thing to do. Hope, on the other hand, should be rattled when Douglas makes the suggestion. After all, it’s weird for Thomas to practically nudge Hope and Thomas into the bedroom – even though he won’t know exactly what they’ll be doing in there.

Nevertheless, The Bold and the Beautiful spoilers say Thomas will become more hopeful about the future. He’ll sprinkle rose petals and set some mood lighting in preparation for the big event. Thomas is anxious to take the next step with Hope, but he’ll definitely face some resistance as this plot moves forward.

Elsewhere, Liam Spencer (Scott Clifton) will seek Wyatt Spencer’s (Darin Brooks) assistance. He’ll think Wyatt is just the person to help him uncover Thomas and Florence “Flo” Fulton’s (Katrina Bowden) secret. Once Wyatt realizes Flo’s hiding something and Thomas is threatening her, he’ll be just as curious as Liam. Wyatt will want to believe his girlfriend’s an honest woman, but he’ll still plan to get some answers.

Liam will convince Wyatt to have a chat with Flo and see what he can find out. B&B fans know this is a tricky situation, but Liam will proceed with caution and try not to offend his brother. The Bold and the Beautiful spoilers say it won’t be long until Wyatt uncovers a shocker involving Flo’s past, so stay tuned.

It sounds like some gripping scenes are on the way. We’ll give you updates as other B&B news comes in. Stick with the CBS soap and don’t forget to check CDL often for the latest Bold and the Beautiful spoilers, updates and news.