BY Heather Hughes on July 30, 2019 | Comments: one comment
Related : Soap Opera, Spoiler, Television, The Bold and the Beautiful 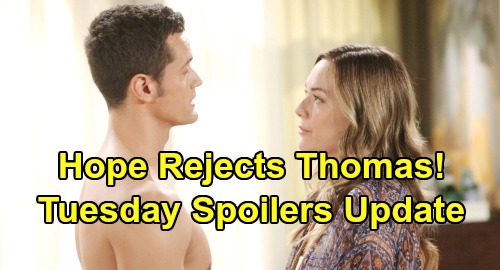 The Bold and the Beautiful (B&B) spoilers update for Tuesday, July 30, tease that Thomas Forrester (Matthew Atkinson) will keep revving up the pressure. He wants Hope Forrester (Annika Noelle) to surrender herself and enjoy some lovemaking, but that seems like the last thing on earth Hope wants to do right now. She’s clearly uncomfortable and has repeatedly tried to wiggle out of this.

However, Thomas just can’t accept the idea that Hope’s not ready. He’ll continue to push Hope until she finally shuts him down. Unfortunately, the way Hope chooses to do that will put her in danger. She’ll end up insisting that Liam Spencer (Scott Clifton) is the man she loves, so Thomas’ anger level will skyrocket. He’ll definitely have a hard time controlling his rage on Tuesday.

The Bold and the Beautiful spoilers say Thomas will lash out, so Hope should feel a bit frightened. She’ll begin to see more of Thomas’ dark side, but this is only the beginning. Thomas will make some far darker moves as the baby swap storyline heats up.

Speaking of Thomas’ dark side, Florence “Flo” Fulton (Katrina Bowden) will hear all about it across town. B&B fans can expect the Logan sisters to spill all during an enlightening chat. Donna Logan (Jennifer Gareis) and Katie Logan (Heather Tom) will be on hand to explain Thomas’ history to Flo. They’ll describe some of the unsettling and obsessive things Thomas has done, so Flo will start to panic.

Flo already felt guilty for hiding the truth about Beth Spencer and letting Hope marry devious Thomas. Once Flo realizes Hope could be in serious trouble, she’ll decide she has to come clean. Flo will face a few more hurdles before she gets to that confession, but it’s definitely coming.

Until then, Liam will ponder Douglas Forrester’s (Henry Joseph Samiri) claims about Beth Spencer being alive. Douglas insisted he knew where Beth was and could show Liam, but will he actually do it? Regardless, Liam’s on the verge of finding out “Phoebe Forrester” (River Davidson and Madeline Valdez) is actually Beth. He’ll confront Flo later this week and finally score the admission he needs.