BY hellodrdavis on July 8, 2019 | Comments: one comment
Related : Soap Opera, Spoiler, Television, The Bold and the Beautiful 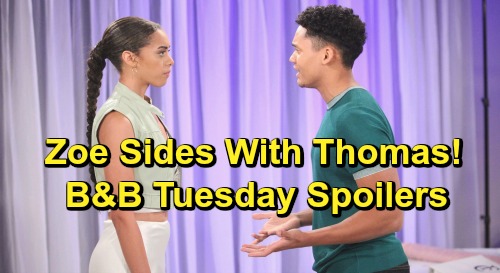 The Bold and the Beautiful spoilers for Tuesday, July 9, tease that news of Thomas Forrester (Matthew Atkinson) and Hope Logan’s (Annika Noelle) engagement will spread. As B&B viewers know, Hope solemnly said yes to Thomas’ marriage proposal, then refused to sleep with him or even share the same bed with him for the night.

But despite that small setback, Thomas will be thrilled that Hope agreed to be his wife. He’ll probably want to shout the news from the rooftops, yet there will be some people who won’t be so happy to hear about the engagement. For one, Brooke Forrester (Katherine Kelly Lang) will be dismayed by her daughter’s decision, and she’ll likely try to talk some sense into her daughter.

Then Liam Spencer (Scott Clifton) and Steffy Forrester (Jacqueline MacInnes Wood) will get wind of the engagement. According to B&B spoilers, Liam will be stunned and horrified by his ex-wife’s decision, and he’ll probably want to rush right to Hope and confront her about the whole thing.

But it looks like Steffy may stop Liam from interfering. She’ll tell Liam that Hope and Thomas are engaged now, and that he needs to accept it and move on with his life without her. Of course, it will take Liam some time to get past his protective feelings toward Hope, but it looks like he’ll reluctantly try.

Meanwhile, on the new episode of B&B on Tuesday, July 9, Xander Avant (Adain Bradley) will reel from what he’s just discovered. As B&B viewers know, he just checked out Thomas’ GPS from the night of Emma Barber’s (Nia Sioux) fatal car accident. He suspected that Thomas followed Emma on Mulholland Drive that night, and it turns out he was right.

Further, Xander discovered that Thomas’ car stopped right at the site of Emma’s accident. That was enough evidence for Xander to conclude that Thomas murdered Emma. Of course, B&B viewers know that Emma’s accident had multiple contributing factors, but Thomas was certainly one of them.

On Tuesday’s episode, Xander will fill Zoe Buckingham (Kiara Barnes) in on his GPS discovery. But he’ll get a big shock when Zoe actually defends Thomas from his accusations. Zoe may argue that just because Thomas was following Emma and stopped at the crash site doesn’t mean that he murdered her. After all, the police say that Emma was texting and driving.

Well, this won’t go over well with Xander. As far as he’s concerned, he’ll have found sufficient proof of murder, and he’ll be angered and offended that Zoe is defending an obvious murderer. Look for some tense scenes between Xander and Zoe, as their relationship starts to unravel over this whole mess.