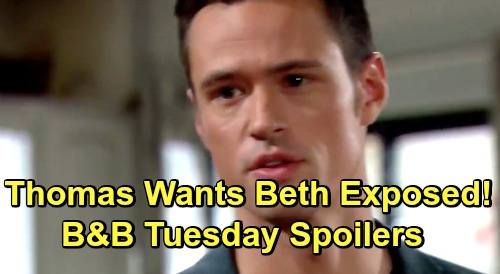 The Bold and the Beautiful (B&B) spoilers for Tuesday, June 11, tease that Florence “Flo” Fulton (Katrina Bowden) will face even more backlash than before. Once Thomas Forrester (Matthew Atkinson) finally bought Flo’s claims, he was naturally outraged. Flo took part in selling Hope Logan’s (Annika Noelle) baby, so that was bad enough.

However, Thomas’ next realization really set off his fury. He now knows “Phoebe Forrester” (River Davidson and Madeline Valdez) is actually Beth Spencer, so he’ll unleash quite a tirade on Tuesday’s new B&B episode, June 11. Flo will insist that they at least know the baby’s in a loving home. She’ll defend Steffy Forrester (Jacqueline MacInnes Wood) as a wonderful mom, but none of that matters since this adoption is illegal.

Thomas will feel like Flo and Dr. Reese Buckingham (Wayne Brady) set two women up for heartbreak. Hope has been battling grief for months and now Steffy’s going to face a loss, too. Of course, Flo may point out it doesn’t have to be that way – at least not for Steffy. Thomas could just leave things alone and keep the secret right along with them.

The Bold and the Beautiful spoilers say Thomas will refuse to stay silent. He’ll declare that the truth must come out, so it won’t be hard to convince Flo he’s right. Part of Flo will worry about losing everything, but another part of her will be relieved that she won’t have to keep this crushing secret anymore.

Thomas will be ready to drop the B&B baby bomb, but he’ll slow down and truly think about this soon. There’ll be a lot to mull over since Steffy would be heartbroken and Thomas’ chance to be with Hope would be blown. Thomas will weigh his options carefully, so don’t be surprised when he goes back and forth on what his next move should be.

In the meantime, Zoe Buckingham (Kiara Barnes) will blast Xander Avant (Adain Bradley) for his disloyalty. She’ll think Xander should keep his mouth shut about Beth to protect her as well as the others involved. Xander, on the other hand, will feel like that’s crazy. Zoe is asking him to prove his love by letting a mother believe her child is dead!

Nevertheless, The Bold and the Beautiful spoilers say Zoe will succeed in silencing Xander – for now anyway. This storyline will bring even more twists and turns, so stay tuned. We’ll give you updates as other B&B news comes in. Stick with the CBS soap and don’t forget to check CDL often for the latest Bold and the Beautiful spoilers, updates and news.