BY Heather Hughes on June 11, 2019 | Comments: one comment
Related : Soap Opera, Spoiler, Television, The Bold and the Beautiful 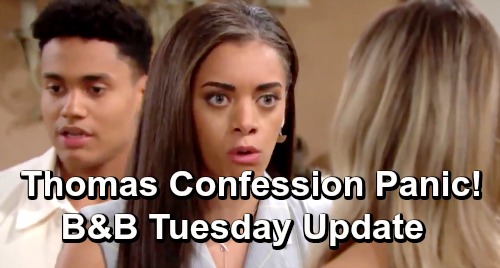 The Bold and the Beautiful (B&B) spoilers update for Tuesday, June 11, tease that Xander Avant (Adain Bradley) will try to stand his ground with Zoe Buckingham (Kiara Barnes). She feels the secret of Beth Spencer’s survival should be kept under wraps, but Xander obviously has other ideas about what’s best. He’ll keep trying to convince Zoe that coming clean is the right call, but she’ll view this as a serious betrayal.

Zoe’s father will certainly go to prison if Xander reveals the truth. Dr. Reese Buckingham (Wayne Brady) stole Hope’s baby girl and let Steffy Forrester (Jacqueline MacInnes Wood) adopt her illegally. The doc’s downfall would be catastrophic, so Zoe won’t get how Xander could hurt her like this. She’ll think Xander should stay tight-lipped if he loves her as much as he claims to.

Zoe will feel like Xander’s being disloyal, but what about Beth’s parents? Who’s being loyal to Hope Logan (Annika Noelle) and Liam Spencer (Scott Clifton)? No one from this whole secret circle, that’s for sure! Several characters know about Beth now and not one of them has had the guts to confess.

Thomas Forrester (Matthew Atkinson) will hope to change that now that he knows the truth about “Phoebe Forrester” (River Davidson and Madeline Valdez). He’s currently reeling over the revelation that “Phoebe” is Beth, so his outburst will get more intense on Tuesday. Thomas will angrily refuse to let Florence “Flo” Fulton (Katrina Bowden) and the others keep this lie going.

The Bold and the Beautiful spoilers say Thomas will rant about all the destruction Reese and Flo have caused. He’ll feel like Hope’s world was torn apart, and Steffy’s world is set to crumble, too. Thomas won’t be happy with the other Beth secret-keepers either, but he’ll think he can make this right. He’ll vow to spill all, but he’ll ultimately hold off and spend some time reflecting first.

B&B viewers know Thomas has gone to great lengths to secure a future with Hope. He doesn’t quite have it locked in yet, but he’s getting there. Thomas can at least count on Hope to be a replacement mom for Douglas Forrester (Henry Joseph Samiri). He believes Hope could find love with Daddy Thomas as well, but that won’t happen if he reveals Beth is alive.

The truth would spark a “Lope” reunion, so that’s something Thomas will have to think about later this week. Steffy’s family bliss will also be a factor, so things are getting complicated for Thomas! The Bold and the Beautiful spoilers say the baby drama’s about to rev up, so don’t miss all the action. We’ll give you updates as other B&B news comes in. Stick with the CBS soap and don’t forget to check CDL often for the latest Bold and the Beautiful spoilers, updates and news.