The Bold and the Beautiful Spoilers: Tuesday, May 7 – Hope Rejects Thomas – Wyatt Fills Liam In On Thomas’ Plot

BY hellodrdavis on May 6, 2019 | Comments: Leave Comments
Related : Soap Opera, Spoiler, Television, The Bold and the Beautiful 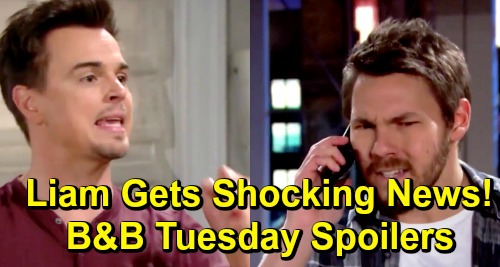 The Bold and the Beautiful spoilers for Tuesday, May 7, tease that Hope Spencer (Annika Noelle) will be in utter disbelief as she stands there in front of Thomas Forrester (Matthew Atkinson) and the ring he’s just shown her.

Thomas saved the engagement ring that he used to propose to Hope years ago in Cabo, and he wants nothing more than for Hope to consider being with him and Douglas Forrester (Henry Joseph Samiri).

But Thomas’ whole production won’t have the desired effect on Hope. Hope will let Thomas down gently but firmly, then leave the scene, as Thomas is left to daydream about Hope. He’ll envision a scenario in which Hope returns and tells him that he’s right and that she’s leaving Liam Spencer (Scott Clifton) for him.

Of course, just because Hope ran out on Thomas doesn’t mean that he didn’t intensify her doubts about her marriage. She’s long thought that Liam should be a full-time dad to Kelly Spencer (Chloe Teperman and Zoe Pennington), so Thomas may have made some inroads with Hope, even though she ultimately left him alone with his ring.

Meanwhile, on the new episode of B&B on Tuesday, May 7, Wyatt Spencer (Darin Brooks) will decide that he’s had about enough of Sally Spectra (Courtney Hope).

He’s just heard an unbelievable tale from Sally about Thomas wanting Hope, and Sally even stated that she understood where Thomas was coming from.

According to B&B spoilers, Wyatt won’t be able to take it. He’s super protective of his brother and he won’t be able to believe that Sally would keep a secret like this, knowing that Thomas was actively trying to destroy Liam and Hope’s marriage. Sally will suggest that she move out, and Wyatt won’t disagree.

Finally, on Tuesday’s episode of B&B, Brooke Forrester (Katherine Kelly Lang) and Ridge Forrester (Thorsten Kaye) will have a disagreement, and it will be about a familiar sticking point for them…their children.

Given what’s just happened with Thomas and Hope, it’s likely that Hope will go to her mother with the whole tale of Thomas’ proposal that Hope split up with Liam.

And if that happens, expect Brooke to get seriously ruffled. She’s been sensitive to Taylor Hayes’ (Hunter Tylo) desire for Thomas and Hope to be together, and she’ll probably be livid when she finds out that Thomas is now actively pursuing Hope. Of course, Brooke is 100% on “team Lope,” so she won’t appreciate Thomas trying to drive a wedge between Hope and Liam.

It will be interesting to see how Ridge responds to finding out what Thomas has been up to. Ridge probably won’t like it, either, but he’s always been receptive to the idea of Steffy Forrester (Jacqueline MacInnes Wood) being with Liam, so he probably won’t be quite as upset as Brooke. This may irk Brooke, who will remain convinced that Hope and Liam are meant for each other.