BY Heather Hughes on November 12, 2019 | Comments: one comment
Related : Soap Opera, Spoiler, Television, The Bold and the Beautiful 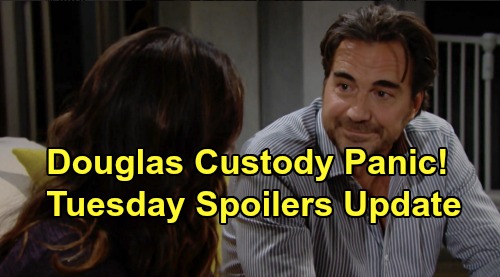 The Bold and the Beautiful (B&B) spoilers update for Tuesday, November 12, teases that Hope Logan (Annika Noelle) will have good news and bad news. Brooke Forrester (Katherine Kelly Lang) will be pleased to know Hope is officially Douglas Forrester’s (Henry Joseph Samiri) mother, but she’ll definitely wonder how Hope made it happen. Hope will be visibly rattled, so Brooke will push her to reveal the whole story.

B&B fans can expect Hope to reflect on the nightmare that just unfolded. She’ll talk about how things went downhill after the adoption papers were signed. Thomas Forrester (Matthew Atkinson) felt manipulated, so that brought plenty of tension between them. Hope was eager to find Douglas, but Thomas thought Hope should be focusing on him instead.

The chase that followed led to their confrontation above the deadly acid vat, which Thomas plummeted into. Hope will tell Brooke that Thomas made a move, so she shoved him. She’ll recall hearing a splash and insist that Thomas was nowhere to be found later.

The Bold and the Beautiful spoilers say Hope will reel as she acknowledges what this means. She’ll exclaim that she killed Thomas, but Brooke won’t think Hope has any guilt in this mess. They’ll debate what went down, but Brooke will be adamant that Thomas is the true guilty party. She’ll feel like Hope did nothing wrong, so she’ll take steps to protect her daughter with a cover-up.

Meanwhile, Steffy Forrester (Jacqueline MacInnes Wood) will speak to Ridge Forrester (Thorsten Kaye) about his wife. No matter how many times they rehash their Thomas issues, Ridge and Brooke can never get on the same page. Steffy certainly has a problem with some of Thomas’ previous behavior, but she no longer views him as a threat. She’ll be on Ridge’s side and will rant about what Brooke’s capable of.

The Bold and the Beautiful spoilers say Steffy will do some serious trash talking! She’ll have a major outburst over Brooke and how she’s targeting their family. Steffy will think Brooke is showing her true colors, so she’ll advise Ridge to be wary.

Later this week, Ridge will get updates on Hope’s adoption of Douglas and fly off the handle. It sounds like some great drama’s brewing, but there’s much more to come. Thomas is actually alive, but his presumed death will still weigh on Hope and set up some bombshells. We’ll keep you posted as other B&B details emerge. Stay tuned to the CBS soap and don’t forget to check CDL often for the latest Bold and the Beautiful spoilers, updates and news.