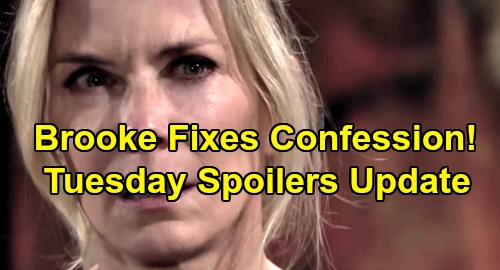 The Bold and the Beautiful (B&B) spoilers update for Tuesday, November 19, teases that some curveballs are on the way. Before we dive in, we should note that B&B will likely be preempted due to impeachment hearings coverage. If that happens, B&B will eventually make an official announcement. They’ll most likely push back Tuesday’s episode to a later date, so we’re just giving you a heads-up!

Now let’s get to all the drama. For starters, Ridge Forrester (Thorsten Kaye) will be confused by Hope Logan’s (Annika Noelle) confession. She just insisted that Thomas Forrester (Matthew Atkinson) is dead, so Ridge is going to want some details. Before Hope can offer them, Brooke Forrester (Katherine Kelly Lang) will try to explain her daughter’s blunder. She’ll think fast and figure out how to undo the damage.

Brooke will argue that Hope simply means Thomas is dead to her. She’ll suggest Hope means the Thomas she knew is gone. Brooke will add that Ridge is the only person who can’t see the truth. Naturally, all of this will seem pretty strange to Ridge. He’ll feel like he’s being left out of the loop, so he’ll wonder if Hope’s ashamed of something that went down that last night.

Ridge will push for honesty and remind Hope that she used to think of him as a dad. He’ll point out that he still wants to protect her like a father would. Ridge will get that Hope must feel the same when it comes to Douglas Forrester (Henry Joseph Samiri). He’ll understand that Thomas has done horrible, inexcusable things – and he’ll be truly sorry for the pain Hope had to go through.

However, Ridge will also defend his son’s intentions. He’ll feel like Thomas knew Hope didn’t love him when they married, but he thought she would love him in time. Ridge won’t think Hope’s being fair by manipulating Thomas and plotting to end him in custody court. He’ll accuse Hope of wanting to keep Thomas away from Douglas permanently. Hope will admit she indeed wanted that, but not the way it happened. 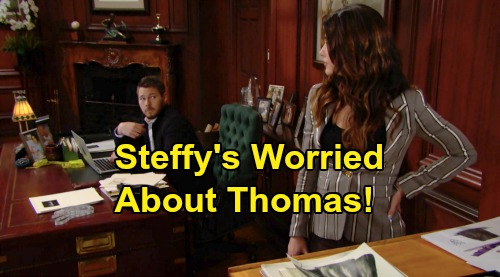 Meanwhile, Liam Spencer (Scott Clifton) will have another sweet conversation with Steffy Forrester (Jacqueline MacInnes Wood). They’ll talk after Liam finishes gathering all his belongings at Forrester Creations. Charlie Webber (Dick Christie) and Jake Maclaine (Todd McKee) will also give Steffy some updates on the hydrofluoric acid cleanup. They’ll insist not a trace is left in the building, but Steffy will want to see for herself and sign off on it.

The Bold and the Beautiful spoilers say Steffy will accomplish that task before calling Ridge. She’ll let him know all the deadly acid has been disposed of. Hope and Brooke will exchange a horrified look as this discussion happens, but they’ll keep quiet about what they know.

Ridge will turn his attention back to Hope and what she’s hiding. That’s when Brooke will pipe up that Thomas wanted to sleep with Hope. He pushed Hope to make love as a trade for Douglas custody. B&B spoilers say that’ll be tough for Ridge to wrap his head around. Ridge will guess that maybe Thomas has run off in shame. He’ll assume that’s the reason Thomas has suddenly disappeared – and the Logan women won’t correct him!