BY hellodrdavis on September 30, 2019 | Comments: 2 comments
Related : Soap Opera, Spoiler, Television, The Bold and the Beautiful 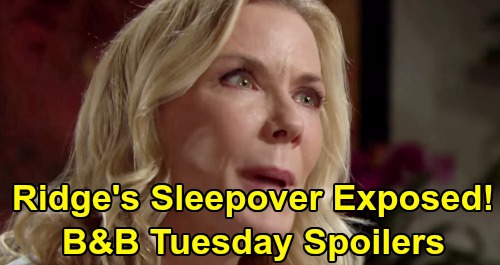 The Bold and the Beautiful spoilers for Tuesday, October 1, tease that Shauna Fulton (Denise Richard) will get a big warning. As B&B viewers know, Katie Logan (Heather Tom) has been in the hospital suffering from kidney failure. She’s in desperate need of a kidney transplant and things are looking pretty critical. Bill Spencer (Don Diamont) has been keeping a vigil by her bedside and both have been hoping for good news regarding a donor.

Well, on Tuesday’s episode, it seems that Shauna will get wind of the fact that Katie’s in the hospital. She might find out from Flo Fulton (Katrina Bowden), who recently learned the news from Sally Spectra (Courtney Hope). At any rate, Shauna will wind up at the hospital, and Bill will encounter her…and he won’t be happy about it.

In fact, B&B spoilers say that Bill will take things a step further. He’ll not only tell Shauna to leave the hospital and stay away from Katie, but he’ll warn her to stay away from all the Logan women as well. Bill’s naturally protective of Katie, but he’s probably also keenly aware of the havoc that Shauna is causing for Brooke Forrester (Katherine Kelly Lang) as well, so he’ll grumble at Shauna and strongly urge her to keep her distance.

Meanwhile, on the new episode of Y&R on Tuesday, October 1, Thomas Forrester’s (Matthew Atkinson) little plan to cause havoc in Ridge Forrester’s (Thorsten Kaye) marriage to Brooke will take off. As B&B viewers know, Thomas has just found out from Danny the bartender (Keith Carlos) that Ridge spent the night with Shauna in the room upstairs at Bikini Bar. And he’s convinced Danny to artfully spill the beans to Brooke.

Thomas and Danny set the plan in motion already, when Danny called Brooke to see if she’d come to the bar and pick up Ridge’s belt, which he left there after his night with Shauna. On Tuesday’s episode, look for Brooke to show up at Bikini Bar to retrieve the belt, and when she does, it looks like Danny will let it slip that there was someone else present that night who helped Ridge to the upstairs room.

Of course, Danny won’t want to hurt Brooke and Ridge in this way, but as B&B viewers know, Thomas promised him more modeling time at Forrester Creations if he complied. That, plus some heavy manipulation on Thomas’ part, will get Danny to comply, and Brooke will find out the horrible news about Shauna and Ridge spending the night together.

It should be a bad scene as Brooke puts it all together and realizes that Ridge has been keeping his time with Shauna a secret from her. But it’s going to be an even worse scene once Brooke finally confronts Ridge about his deception!