BY hellodrdavis on October 7, 2019 | Comments: 2 comments
Related : Soap Opera, Spoiler, Television, The Bold and the Beautiful 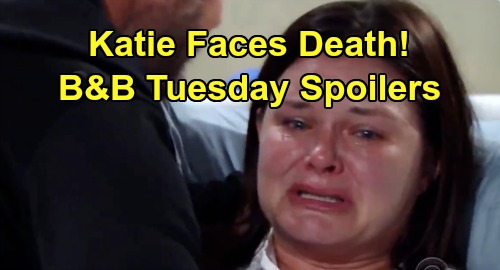 The Bold and the Beautiful spoilers for Tuesday, October 8, tease that Flo Fulton (Katrina Bowden) will be feeling overwhelmed. As B&B viewers know, her mother Shauna Fulton (Denise Richards) has just suggested that she should get tested to be a potential kidney donor for Katie Logan (Heather Tom). Shauna seems to think that it’s a move that could allow Flo to reclaim her place in the Logan family, and she just might be right.

Of course, Flo has no idea whether she’d even be a match, but since Storm Logan (William deVry) ultimately gave his heart to Katie, there’s probably a good chance that Flo would be a compatible donor. Flo seems a bit floored by her mom’s suggestion that she get tested, but it looks like she’ll go ahead and get herself checked out, to see whether it’s even a possibility that she could save Katie’s life. At this point, it’s Katie’s only hope.

According to ongoing B&B spoilers, Flo will indeed be a match for Katie, and she’ll make the decision to go ahead with the surgery and donate her kidney to save her aunt’s life. But she’ll insist that the donation is done anonymously, so that Katie gets the kidney she needs without a lot of drama. Flo knows that the family probably wouldn’t be initially happy to learn that she’s the donor, plus she won’t want to appear as though she’s trying to ingratiate herself back into the family.

But that’s exactly what Shauna will want – in fact, she’ll argue on Tuesday’s B&B episode that donating a kidney would be Flo’s ticket right back into the Logan family. It could make her eventual reunion with the Logans, the Forresters, and the Spencers much smoother, and Shauna will encourage her daughter to capitalize on the situation if her kidney is a match. Of course, Shauna will probably also be thinking about how Flo’s donation could somehow get her closer to Ridge Forrester (Thorsten Kaye), since Ridge never seems to be far from her mind.

Meanwhile, on the new episode of B&B on Tuesday, October 8, Katie will be beside herself with worry and grief. She was devastated to find out that Brooke Forrester (Katherine Kelly Lang) would be unable to donate her kidney. Brooke was really her last hope, as all other members of the family had been tested and weren’t a match. Now Katie is deeply worried about her chances of survival, which aren’t looking good at this point unless a donor is found immediately.

Of course, Katie’s biggest concern will be for her son Will Spencer (Finnegan George). She’s terribly worried about the effect it would have on him if she were to die. According to B&B spoilers, Katie will share some of her thoughts on the matter with Bill Spencer (Don Diamont), and in a touching moment she’ll admit her fear of dying and of not being around to see her son grow up.

In addition, it looks like Bill will have a heartwarming admission for Katie – perhaps he’ll let her know that she’s the love of his life, and/or he’ll commit to being there for their son in the event that she dies. Either way, look for Bill and Katie to rally together and have some poignant moments, as they get some things out in the open.