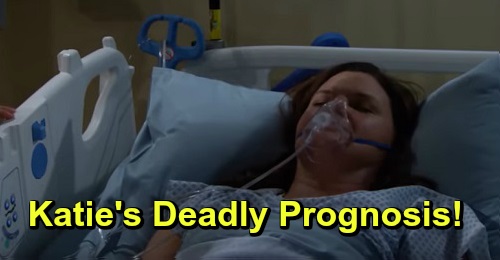 The Bold and the Beautiful (B&B) spoilers update for Tuesday, September 24, teases that Bill Spencer (Don Diamont) will await news on Katie Logan’s (Heather Tom) condition. There’s a good chance Bill will be pretty impatient, but that’s just because he’s so distraught. He adores Katie and can’t bear the thought of losing her – especially since they’ve finally found their happiness again.

This mystery medical crisis will leave Bill with plenty of questions and concerns. The same goes for Katie’s family and close friends. The Bold and the Beautiful spoilers say many of the Logans, Forresters and Spencers will gather at the hospital. They’ll want to support Katie in her time of need and hopefully get some answers soon enough.

Dr. Jordan Armstrong (Vincent Irizarry) will indeed figure out the problem with the help of his team. Unfortunately, it won’t be something medication can fix. B&B spoilers say Katie’s in kidney failure, so she’ll need a transplant or else death is imminent. Bill and the others will find out Katie’s prognosis within the next couple episodes, so they’ll definitely fear the worst.

Until then, Quinn Forrester (Rena Sofer) will have her mind on a different problem: Wyatt Spencer’s (Darin Brooks) complicated love life. It’s not as serious as Katie’s predicament, but it’s still important to this protective mom. Quinn just doesn’t view Sally Spectra (Courtney Hope) as the right girl for her son. She’d rather see Wyatt reunite with Florence “Flo” Fulton (Katrina Bowden), even after her massive mistakes.

Quinn understands that Flo screwed up, but she believes in the power of change and forgiveness. She’s made changes of her own and earned forgiveness in return, so she knows what she’s talking about. Quinn may use that as she tries to sell Eric on the idea. She’ll insist that Wyatt belongs with Flo and should break up with Sally, but Eric may disagree with his meddling wife.

Of course, Quinn will also tell Wyatt exactly what she thinks. She’ll push Wyatt to choose his high school sweetheart once more and ditch Sally immediately. Quinn should be furious she finds out Wyatt proposed and Sally accepted! She may rev up her Flo and Wyatt reunion efforts as a result.