BY hellodrdavis on September 2, 2019 | Comments: one comment
Related : Soap Opera, Spoiler, Television, The Bold and the Beautiful 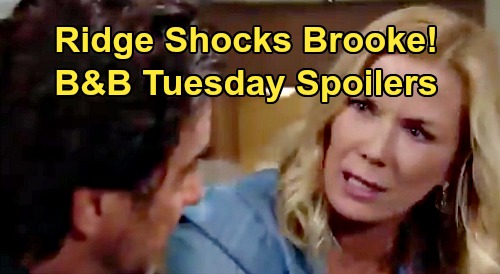 The Bold and the Beautiful spoilers for Tuesday, September 3, tease that Brooke Forrester (Katherine Kelly Lang) will be in total disbelief. As B&B viewers know, she’s just received a major reprieve, courtesy of Thomas Forrester (Matthew Atkinson). Thomas told Detective Alex Sanchez (Jeremy Ray Valdez) that his fall from the cliff was an accident and that nobody pushed him before he fell. That, of course, isn’t entirely true, since Brooke did push him before he tumbled off the cliff.

And while Brooke may have skirted any legal action as a result of her actions, she’s not off the hook by any means with Ridge Forrester (Thorsten Kaye). Ridge is still fiercely angry with her for what he saw, which was Brooke angrily pushing Thomas before he fell. It doesn’t matter what Thomas said in front of the detective; Ridge knows what he saw and he’s having a really hard time getting past it.

This is leaving Brooke utterly confused. From her perspective, she did what any mother would do in the same situation – she intervened to protect her daughter, whom Thomas was physically grabbing at the time. She doesn’t deny pushing Thomas, but she maintains that her intent was to get Thomas to back off of Hope Logan (Annika Noelle), not to push Thomas over the cliff.

And this is where Brooke and Ridge just can’t see eye to eye. On Tuesday’s B&B episode, look for Brooke to be in complete disbelief that Ridge can’t see her point of view on the incident. And it doesn’t look like these two are going to find common ground anytime soon, as B&B spoilers say that the divide between them is only going to get wider from here.

Meanwhile, on the new B&B episode on Tuesday, September 3, Shauna Fulton (Denise Richards) will visit her daughter Flo Fulton (Katrina Bowden) in jail. Shauna feels terribly for her daughter, and she wants to provide bail money and legal representation for her, but she’s unable to do so. Further, she was unable to persuade Quinn Forrester (Rena Sofer) to provide them with assistance, so it looks like Flo will be staying in jail for the foreseeable future.

But on this visit, it looks like Shauna will have some news for Flo. She’ll relay what recently happened with Thomas, Hope, and Brooke on the cliff at Steffy Forrester’s (Jacqueline MacInnes Wood) house, and Flo will be horrified. Of course, Flo isn’t Thomas’ biggest fan, but she won’t want to see him physically harmed. She’ll probably be relieved to hear that Thomas survived his fall, even though she hopes he does pay in other ways for his crimes.

It does seem, though, that Flo will start to comprehend the enormous impact of her actions on others. After all, if she had just told the truth from the moment she found out about Reese Buckingham’s (Wayne Brady) kidnapping and baby swap, then a lot of heartache could have been prevented. Not only would Hope and Liam Spencer (Scott Clifton) have had their daughter back sooner, but the whole situation with Brooke and Thomas on the cliff could have been prevented.

Of course, since Flo has nothing but time on her hands, she’ll probably do a lot of reflecting about her actions and all of the things she could have prevented had she just done the right thing from the get-go. And since Shauna will be nowhere nearer to scraping together bail money, it looks like Flo will remain in jail with her regrets.