BY Marcy Cohen on February 22, 2019 | Comments: one comment
Related : Soap Opera, Spoiler, Television, The Bold and the Beautiful 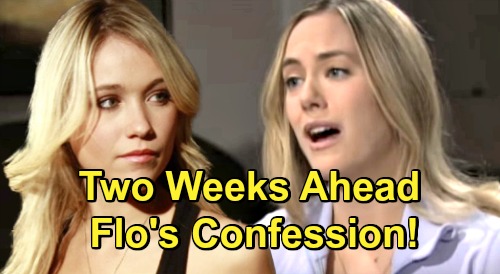 The Bold and the Beautiful (B&B) spoilers tease that Florence “Flo” Fulton (Katrina Bowden) will have a crisis of conscience. She already feels horrible about the pain she helped inflict on Hope Spencer (Annika Noelle). However, Flo’s guilt will get even worse once she crosses paths with Hope. She’ll actually see that pain in her eyes and feel the sorrow radiating off her.

Flo will hate that she’s partially to blame for Hope’s suffering. Dr. Reese Buckingham (Wayne Brady) couldn’t have pulled off this plot without a fake birth mom. Someone else would’ve been paid to do it if Flo hadn’t agreed, but she’s the one who signed on for this. Flo will have to acknowledge that as she wrestles with the regrets she’s facing. She’ll wish she could make Hope’s agony disappear.

Of course, B&B fans know Flo has the power to do that. It’s just a matter of if she’s willing to face the consequences and betray her partner in crime. The Bold and the Beautiful spoilers say Hope will confide in Katie Logan (Heather Tom) this week. She’ll probably talk about the grief she’s still facing and how a divorce may be in her future.

The Bold and the Beautiful spoilers say Flo will likely plan to confess. She’ll end up sharing a crucial moment with Hope during the week of March 4-8. Flo may resolve to spill the baby beans and brace for backlash. Naturally, B&B won’t make it that easy! It turns out Zoe Buckingham (Kiara Barnes) will spot their conversation and rush over to intervene.

It looks like Zoe will derail Flo’s confession to keep Reese out of prison. After Zoe pulls Flo aside, she may remind Flo that this isn’t just about her. There are other people involved, including Zoe. She’ll want Flo to keep her mouth shut like she promised and forget about Hope. In fact, Zoe would love it if Flo would just leave town.

Since Flo isn’t going anywhere, Zoe will have to watch closely and make sure Reese’s fellow schemer stays in line. We’ll give you updates as other B&B news comes in. Stick with the CBS soap and don’t forget to check CDL often for the latest Bold and the Beautiful spoilers, updates, and news.