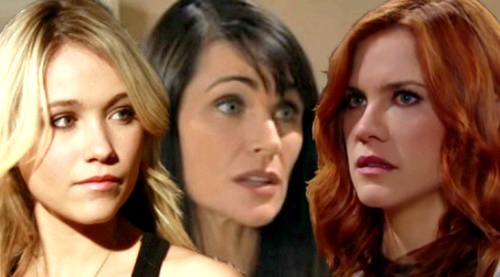 The Bold and the Beautiful (B&B) spoilers tease that Quinn Forrester (Rena Sofer) will focus on Wyatt Spencer’s (Darin Brooks) love life once again. She had a bit of a scare when Shauna Fulton (Denise Richards) admitted Bill Spencer (Don Diamont) could be Florence “Flo” Fulton’s (Katrina Bowden) daughter. Thankfully, Storm Logan (William deVry) was proven to be the bio dad instead.

That means Flo and Wyatt aren’t related, which is great news for Quinn. She still wants these B&B high school sweethearts to get a second chance at love. Quinn always thought Flo was Wyatt’s perfect match. She feels like they would’ve stuck together if she hadn’t forced Wyatt to leave town so abruptly.

Quinn will believe this is her shot at making it right, so she’ll definitely take advantage of it. During the week of April 22-26, The Bold and the Beautiful spoilers say Quinn will form a plot. She’ll put together the ideal plan to drive Sally Spectra (Courtney Hope) away from Wyatt, but this isn’t going to be easy. Wyatt and Sally’s bond is still pretty strong, so Quinn will have to be smart about this.

Quinn doesn’t want to alienate her son either, which is why she can’t let him know what she’s up to. She’ll need to be subtle about her matchmaking as well as her “Wally” sabotage efforts. Of course, Quinn could have a couple things working in her favor. One happens to be Flo’s lingering feelings for Wyatt. She still loves him after all these years, so at least Quinn doesn’t have to worry about that.

Quinn may even go to Flo and encourage her to make more moves. She might coach Flo on how to win Wyatt over and hope that it pays off. Shauna Fulton (Katrina Bowden) may do her part here, too. She’ll be on the same page with Quinn about their kids belonging together.

Shauna knows Flo’s situation is messy with all the baby swap drama, but she may think putting Flo with Wyatt will help. That’d give Flo a solid reason to stay quiet for good. She certainly wouldn’t want to blow up her own relationship. Perhaps Quinn will recruit Shauna for a few steps of her sabotage scheme.