The Bold and the Beautiful Spoilers: Wednesday, April 17 – Lope Want To Tell Steffy About Flo – Shauna Flips Over Baby Switch

BY hellodrdavis on April 16, 2019 | Comments: one comment
Related : Soap Opera, Spoiler, Television, The Bold and the Beautiful 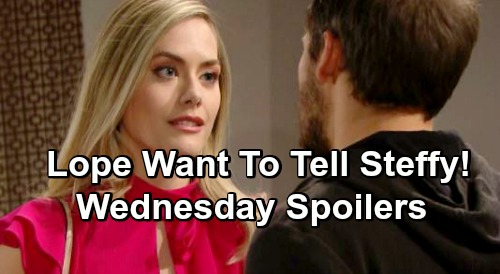 The Bold and the Beautiful spoilers for Wednesday, April 17, tease that Shauna Fulton (Denise Richards) will freak out when she hears the details about what her daughter Florence “Flo” Fulton (Katrina Bowden) has done. Flo has just told Shauna that she’s pretending to be the birth mother of Phoebe Forrester (Isabella de Armas and Redford Prindiville), who is actually Hope Logan’s (Annika Noelle) biological child.

On Wednesday’s episode of B&B, Shauna will hear the rest of the story – namely, that Steffy Forrester (Jacqueline MacInnes Wood) is the person who adopted Phoebe. Shauna will be alarmed to learn just how connected the Forresters, Spencers, and Logans are. After all, Flo has gotten involved in deceiving some of the most powerful families in Los Angeles!

Shauna will likely try to wrap her head around the circumstances surrounding Flo’s big deception, and she won’t be happy with what Reese Buckingham (Wayne Brady) has gotten her daughter mixed up in. Shauna will probably try to brainstorm and figure out how Flo can extricate herself from the situation, but there’s only one problem: Flo’s now a member of the Logan family, so it’s not like she can just disappear.

At least now Flo will have someone to talk to about her situation, and she’ll probably feel some relief, but that doesn’t mean that her problems will go away. She’s still a Logan woman who participated in a scheme that ripped a baby away from another Logan woman. What a mess.

Meanwhile, on the new episode of The Bold and the Beautiful on Wednesday, April 17, Hope will fill Liam Spencer (Scott Clifton) in on the new family development involving Flo and her parentage. Liam will be floored, and he’ll probably wonder how this is going to affect Steffy and her family.

The Logans are already wondering whether Flo’s discovery that she’s a Logan will make her somehow regret her decision to give her baby up for adoption. Liam and Hope will probably wonder the same, and they’ll worry about what could happen between Steffy and Flo going forward.

But in the shorter term, Hope and Liam will have another matter to discuss. B&B spoilers say that they’ll realize that Steffy needs to be told about Flo being a member of the Logan family. Of course, the information is going to come as a shock to Steffy, who naturally assumed that Flo wouldn’t be an active part of Phoebe’s life.

But now that Flo’s a Logan, she’ll be inevitably connected to Steffy, and thus to Phoebe. It will be a lot for Steffy to digest, and Hope and Liam will carefully consider when Steffy should be told that Storm Logan (William deVry) is Flo’s father. It looks like they’ll decide that sooner is better than later, since B&B spoilers indicate that Liam will soon be taking a trip to Paris.

It sounds like a lot of B&B drama is heating up for Wednesday’s episode, so stay tuned! We’ll give you updates as B&B news comes in. Stick with the CBS soap and don’t forget to check CDL often for the latest Bold and the Beautiful spoilers, updates, and news