The Bold and the Beautiful Spoilers: Wednesday, August 14 Update – Beth Feels the Logan Love – Delusional Thomas Must Have Hope 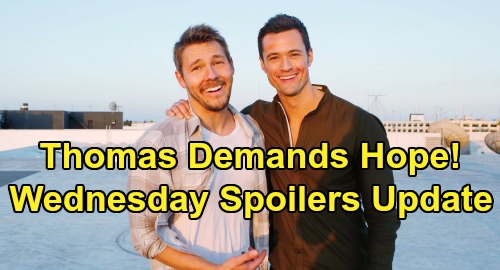 The Bold and the Beautiful (B&B) spoilers update for Wednesday, August 14, tease that Thomas Forrester (Matthew Atkinson) won’t be able to get Hope Forrester (Annika Noelle) out of his head. He’s completely obsessed, so it’s not like he’s just going to shut down his feelings. Instead, Thomas will become increasingly fixated on Hope and what might’ve been…and in his opinion, what could still be.

Thomas has found himself a hiding spot with his friend, Vincent Walker (Joe LoCicero). Good ol’ Vinnie came through for his pal, but he can’t fix Thomas’ marriage. Neither can Thomas, but that won’t stop him from trying! The Bold and the Beautiful spoilers say Thomas will gaze longingly at photos on Wednesday. He’ll scroll through his phone looking at Hope pics as he considers what’s next.

Thomas will feel like Hope just doesn’t understand the depths of his love. He’ll be frustrated with Hope for being hung up on Liam Spencer (Scott Clifton) and refusing to see things his way. However, Thomas will believe he can repair his relationship. He’ll convince himself a reunion with Hope is possible with another round of sneakiness and some hard work.

Of course, Hope only agreed to wed Thomas because of Douglas Forrester (Henry Joseph Samiri). This was never really a true marriage, so Thomas doesn’t have anything to win back. Hope’s love for Liam was there all along. Liam would still be Hope’s husband if it weren’t for the “Phoebe Forrester” is Beth Spencer (River Davidson and Madeline Valdez) fiasco.

Even so, Thomas won’t worry about Liam too much. He’ll believe “Thope” can overcome the obstacles and beat “Lope” in the end. Thomas just has to get Hope away from Liam first, so that’ll bring a dark plot in the week ahead. B&B fans won’t want to miss all the action and suspense.

In the meantime, the Logan sisters will gather with a sweet goal in mind. They’ll want to give Beth a warm welcome to their family. Although “Phoebe” was thought to be a Logan through Florence “Flo” Fulton (Katrina Bowden), that was a different situation. Steffy Forrester (Jacqueline MacInnes Wood) planned to raise “Phoebe,” so it wasn’t quite the same as Beth being a true member of the Logan fam.

Hope’s baby girl is a miracle to the Logans now that they’ve reunited. The Bold and the Beautiful spoilers say Katie Logan (Heather Tom), Donna Logan (Jennifer Gareis) and Brooke Forrester (Katherine Kelly Lang) will gush over little Beth. They’ll also be thrilled for Hope, who’s finally put all her grief to rest.

Naturally, the peace won’t last. More drama’s looming thanks to Thomas the schemer! We’ll give you updates as other B&B news comes in. Stay tuned to the CBS soap and don’t forget to check CDL often for the latest Bold and the Beautiful spoilers, updates and news.