The Bold and the Beautiful Spoilers: Wednesday, August 28 – Ridge Hostile Toward Brooke – Shauna Heartbroken To See Flo In Custody

BY hellodrdavis on August 27, 2019 | Comments: 2 comments
Related : Soap Opera, Spoiler, Television, The Bold and the Beautiful 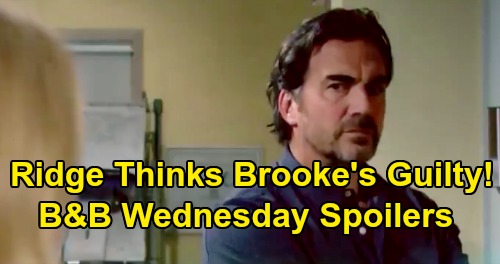 The Bold and the Beautiful spoilers for Wednesday, August 28, tease that Ridge Forrester (Thorsten Kaye) will be feeling frustrated. As B&B viewers know, he’s just listened as Hope Logan (Annika Noelle) explained to him and to Brooke Forrester (Katherine Kelly Lang) how Brooke misread the situation on the cliff.

Hope has just stated that Thomas Forrester (Matthew Atkinson) wasn’t threatening her or causing her to be in imminent danger. Rather, she believes that Brooke simply mis-read the situation and thought that Thomas was threatening her.

Well, according to B&B spoilers, that’s going to really infuriate Ridge. He’ll probably start to wonder whether Brooke was telling a tall tale when she previously claimed that Thomas had been threatening Hope and she reacted in order to protect her daughter from imminent harm.

Ridge saw Brooke’s push and Thomas’ fall as well, and he’ll think that Hope’s account comports with what he saw, and that Brooke’s account is simply self-serving on her part.

Look for Ridge to get even more hostile toward Brooke as Wednesday’s episode unfolds. He will be anxiously waiting for word from Dr. Jordan Armstrong (Vincent Irizarry) about Thomas’ condition, as will Brooke. After all, if Thomas ends up dying or suffering serious injuries or disabilities as a result of the fall, Brooke could be in real trouble with the law.

And even if Thomas makes it through relatively unscathed, Brooke could be charged with attempted murder, or at the very least assault. Ongoing B&B spoilers indicate that it won’t be long before Detective Alex Sanchez (Jeremy Ray Valdez) comes along and wants some answers about what happens, and at that point Hope’s statement about Thomas not threatening her will become very important, and Ridge just might be angry enough to insist that Brooke be arrested.

Meanwhile, on the new episode of B&B on Wednesday, August 28, Shauna Fulton (Denise Richards) will get a big reality check. As B&B viewers know, she was horrified when her daughter Flo Fulton (Katrina Bowden) was arrested and hauled off to jail.

She begged Ridge and Brooke not to turn Flo in for her actions with respect to Beth Spencer’s (River Davidson and Madeline Valdez) kidnapping and illegal adoption, but they were determined to make sure that Flo is prosecuted to the fullest extent of the law.

On Wednesday’s episode, Shauna will visit her daughter in jail for the first time. It’s unclear at this point whether a judge has set bail for Flo and whether she’s eligible for release, but even if she is, it doesn’t seem that either Shauna or Flo have the resources to post bail. So Flo may be looking at a lengthy jail stay until she is tried for her crimes. And the thought of that is going to be horrifying for Shauna.

According to B&B spoilers, Shauna will be heartbroken when she sees her daughter in custody. Jail isn’t a pretty place, and Flo will probably share with her mother everything she’s gone through while in custody – the booking process, adjusting to a dingy cell, and so on.

Shauna won’t want to see her precious daughter dealing with all of this, and she’ll likely be frustrated that she doesn’t have the financial means to post bail and get Flo out of there.

Ongoing B&B spoilers indicate that Shauna will soon turn to her friend Quinn Forrester (Rena Sofer) for assistance in getting Flo out of jail, but that could be tricky, given that Quinn is married to Steffy Forrester’s (Jacqueline MacInnes Wood) grandfather. Steffy was terribly affected by Flo’s actions and had to give up her adopted daughter, so it may be tough for Quinn to help, but it looks like she’ll certainly try.