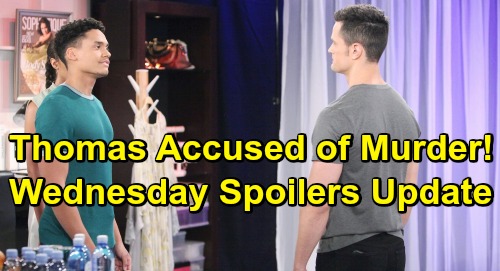 The Bold and the Beautiful (B&B) spoilers update for Wednesday, July 10, tease that Liam Spencer (Scott Clifton) will make a desperate plea to Hope Logan (Annika Noelle). He just showed up to confront Hope about the engagement, but she’s standing her ground. Hope feels like it’s time for her to move on and be a mother to Douglas Forrester (Henry Joseph Samiri).

Of course, Thomas Forrester (Matthew Atkinson) is just using exploiting Hope’s weak spots. When Liam fails to convince Hope of that, he’ll try another approach. Liam will reveal what’s in his heart and try to make Hope see that marrying Thomas is the wrong call. The Bold and the Beautiful spoilers say Liam will declare his true love for Hope. It sounds like Liam will insist Hope’s the woman he really wants.

However, Liam may find it tough to persuade Hope since he recently slept with Steffy Forrester (Jacqueline MacInnes Wood). Thomas’ drugging set that lovemaking in motion, but it doesn’t matter on Hope’s end. She just knows Liam let go of what they had awfully fast, so she’ll be ready to let go, too.

Hope won’t see what she has to lose by marrying Thomas and starting a new family with him. Since Liam and Steffy have their family now, Hope will argue it’s all going to work out for the best. She’ll urge Liam to accept the outcome, but he’ll continue to rant about Thomas. Liam will even vow to find proof of Thomas’ manipulation, so we’ll see if he can pull that off soon.

Meanwhile, Xander Avant (Adain Bradley) will mull over the proof he’s already uncovered. He believes Thomas is a murderer who deserves to pay, so he’ll tell it to his face on Wednesday. B&B fans can expect some intense scenes as Xander confronts Thomas. He’ll hurl accusations and get some threats hurled back as a result.

Thomas will make it clear that Xander’s not going to stand in his way. Now that Hope’s agreed to marry him, Thomas will be even more determined to keep Beth Spencer’s survival a secret. He certainly won’t want any Emma Barber (Nia Sioux) details coming to light either. Thomas will do whatever it takes to silence Xander, so this secret-keeper had better be careful!