BY hellodrdavis on July 23, 2019 | Comments: one comment
Related : Soap Opera, Spoiler, Television, The Bold and the Beautiful 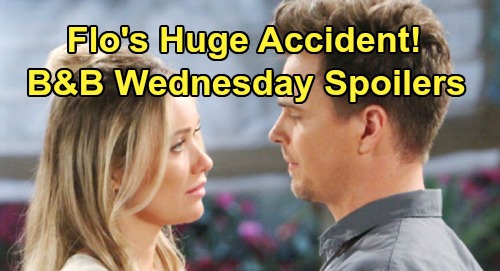 The Bold and the Beautiful spoilers for Wednesday, July 24, tease that Florence “Flo” Fulton (Katrina Bowden) will be on the verge of opening up to Wyatt Spencer (Darin Brooks) and telling him everything about the baby swap and adoption scam that she’s been keeping secret for months. As Wyatt waits expectantly, Flo will once again contemplate whether she really wants to spill the truth.

Of course, Wyatt will have no idea what he’s about to hear, but he knows from his brother Liam Spencer (Scott Clifton) that Flo’s keeping a secret with Thomas Forrester (Matthew Atkinson), and that Liam overheard Thomas basically threaten Flo. Wyatt will expect to hear some big secret, but it looks like something or someone will prevent the big reveal from happening.

Ongoing B&B spoilers indicate that the baby swap/secret mystery storyline is going to continue for several more weeks, and that it will involve the introduction of a new character, Dr. Jordan Armstrong (Vincent Irizarry). So, viewers can look for Flo to suddenly clam up and not spill the beans to Wyatt just yet.

But as Wyatt and Flo continue to talk, Flo will let a crucial detail about her past slip out. Exactly what she reveals remains to be seen, but it’s bound to be a real shocker, since B&B spoilers say that Wyatt will be utterly dumbfounded by what he hears. Perhaps she’ll reveal her past friendship with Reese Buckingham (Wayne Brady), which would certainly shock Wyatt.

Meanwhile, on the new episode of The Bold and the Beautiful on Wednesday, July 24, Hope Forrester (Annika Noelle) will be feeling a range of emotions. She’s just rejected Thomas in the bedroom and will be feeling unsettled about that, but she’ll also have the wedding ceremony on her mind.

As B&B viewers know, Hope’s vows were interrupted by Phoebe, who crawled up to her and babbled “mama.” Hope hasn’t been able to get the scene off of her mind, as it brought up a lot of feelings about her marriage to Liam and the family they were expecting to have with Beth…a family that was taken away from them when Beth died.

On Wednesday’s episode, Brooke Forrester (Katherine Kelly Lang) will notice that her daughter is upset and needs help, so she’ll offer her comfort and support. Brooke knows that Hope has just married someone she doesn’t love, all so she can be a mother to Douglas Forrester (Henry Joseph Samiri). Brooke will console Hope, who will be missing Beth and ruminating about her loss.