BY hellodrdavis on July 30, 2019 | Comments: one comment
Related : Soap Opera, Spoiler, Television, The Bold and the Beautiful 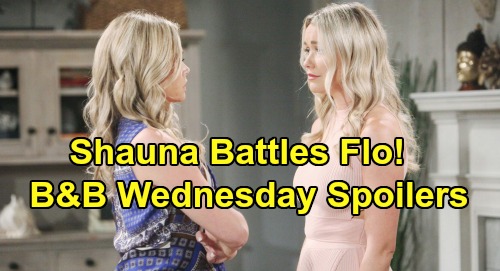 The Bold and the Beautiful spoilers for Wednesday, July 31, tease that Douglas Forrester’s (Henry Joseph Samiri) words and actions will finally lead Liam Spencer (Scott Clifton) to start putting the pieces of the puzzle together. As B&B viewers know, Liam had a noticeable moment of realization as he was telling Steffy Forrester (Jacqueline MacInnes Wood) about Douglas’ claim about Beth Spencer being alive.

Of course, exactly what Liam realized remains to be seen on Wednesday’s episode, but it certainly appeared that he had a moment of clarity where he understood that Douglas’ insistence that Beth is alive was related to the big secret that Thomas Forrester (Matthew Atkinson) and Florence “Flo” Fulton (Katrina Bowden) are keeping – which is a secret that Thomas doesn’t want Hope Forrester (Annika Noelle) to ever find out.

And at the same time, Liam’s got a suspicion that Flo never gave birth.  B&B viewers will remember that he’s still waiting for the Las Vegas hospital where Flo supposedly gave birth to get back with him. Given that Liam won’t want to raise the alarm bells to Steffy or Hope just yet, he’s most likely going to want to continue gathering evidence and secure proof that his suspicion is correct – that Phoebe Forrester (River Davidson and Madeline Valdez) is somehow his daughter Beth.

According to B&B spoilers, Liam will start putting the pieces together. So far he’s got (a) Douglas’ statements, which he thinks are snippets of what Douglas has heard from Thomas, (b) Thomas and Flo’s argument about a secret that Hope must never know, (c) Wyatt Spencer’s (Darin Brooks) intel that Flo may have never had a baby, (d) suspicious-looking adoption records from Phoebe’s adoption, and (e) the fact that there was a mystery person involved in the adoption who was a colleague of Taylor Hayes (Hunter Tylo).

It will be interesting to watch Liam as he tries to put everything together. He’ll know that time is of the essence, since if what he suspects is true, then Thomas is really up to no good with Hope and he’ll be able to prove it and get her away from him. Plus, he’ll know how much it will mean to Hope to know that Beth somehow survived, so he’ll want to get enough information in hand so he can feel comfortable disclosing everything to Hope.

Next, on the new episode of B&B on Wednesday, July 31, Shauna Fulton (Denise Richards) will come upon Flo, who in a state of panic. As B&B viewers know, Flo just heard some seriously disturbing details about Thomas from Katie Logan (Heather Tom), Brooke Forrester (Katherine Kelly Lang), and Donna Logan (Jennifer Gareis).

Flo learned about some of the incidents in Thomas’ past, including how he set fire to a home and pushed Rick Forrester (Jacob Young) out of a window at Forrester Creations. This was apparently the last straw for Flo, who decided that she couldn’t take it anymore and that Hope needs to know the truth about the man that she just married.

And Flo has a lot tell about Thomas. Not only has he been keeping the Beth secret from Hope all for personal gain, but as far as Flo knows he directly caused the death of Emma Barber (Nia Sioux). From all indications, we’ll see Flo bound and determined to confess everything and do so as soon as possible.

But since Flo will run into Shauna, there will be a bit of a delay in her confession. It looks like Flo will want to seek out Wyatt and confess to him – possibly because he so adamantly offered to help her if she spilled what was bothering her – but according to B&B spoilers, Shauna will stop her dead in her tracks.

Shauna will do her best to stop Flo from going to Wyatt and spilling the beans. She’ll likely give Flo all the familiar reasons for continuing to keep the secret – i.e., that she shouldn’t jeopardize her new life as a Logan and as Wyatt’s girlfriend, that Beth is being well-cared-for, and that she could go to jail. But it looks like Flo won’t succumb to her mother’s pressure this time, as B&B spoilers say that she’ll remain determined to tell Wyatt everything.
.
It sounds like a lot of B&B drama is heating up for Wednesday’s episode, so stay tuned! We’ll give you updates as B&B news comes in. Stick with the CBS soap and don’t forget to check CDL often for the latest Bold and the Beautiful spoilers, updates, and news.