The Bold and the Beautiful Spoilers: Wednesday, July 31 Update – Liam in Shock Over Phoebe Being Beth, Confronts Flo

BY Heather Hughes on July 31, 2019 | Comments: one comment
Related : Soap Opera, Spoiler, Television, The Bold and the Beautiful 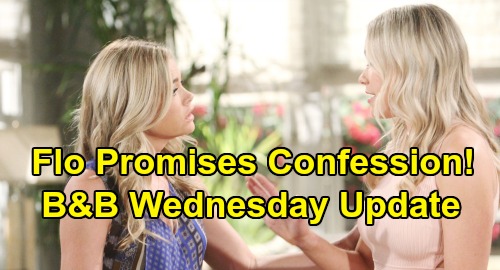 The Bold and the Beautiful (B&B) spoilers update for Wednesday, July 31, tease that Florence “Flo” Fulton (Katrina Bowden) will remain in total panic mode. She fears for Hope Forrester’s (Annika Noelle) safety now that she’s heard all the horror stories about her new husband. Flo already knew Thomas Forrester (Matthew Atkinson) was dangerous, but the gravity of the situation is suddenly hitting her harder than ever.

B&B fans can expect Flo to speak with Shauna Fulton (Denise Richards) on Wednesday. The Bold and the Beautiful spoilers say Shauna will be deeply concerned about her daughter. She’ll sense that Flo’s about to spiral out of control. Shauna won’t want Flo to make a mistake she might regret, so she’ll try to calm her down and warn her not to come clean.

However, Flo will refuse to chicken out this time. She’ll explain why she feels this is something she has to do. Flo can’t let Hope stay married to Thomas, a risky creep she doesn’t love. She’ll also be sick of all the pressure and guilt. Flo will let Shauna know this confession’s happening whether she likes it or not. The Bold and the Beautiful spoilers state that Flo will move forward with her plan and hope for the best.

While Flo gears up for a difficult admission, Liam Spencer (Scott Clifton) will see the big picture. He’s been putting all the puzzle pieces together, so things are starting to come into focus. Liam has been determined to find out Flo and Thomas’ big secret. He also suspects Flo never had a baby and will get confirmation on that soon. The shady adoption details were another red flag in this pursuit of the truth.

Now Douglas Forrester (Henry Joseph Samiri) is outright claiming Beth Spencer is alive and “Phoebe Forrester” (River Davidson and Madeline Valdez) is Beth. It’s all staring Liam right in the face at this point. Based on Liam’s reaction in Tuesday’s episode, July 30, we can tell he’s on the verge of acceptance. Liam will want to nail down a few more facts before he makes any major moves, but he can see what’s coming.

Once Liam determines Douglas is right and “Phoebe” is indeed Beth, he’ll be ready to unleash his wrath on Flo. Liam will also want answers about how this baby swap came about, so he’ll derail Flo’s confession to Wyatt Spencer (Darin Brooks) before long. We’ll give you updates as other B&B news comes in. Stay tuned the CBS soap and don’t forget to check CDL often for the latest Bold and the Beautiful spoilers, updates and news.