The Bold and the Beautiful Spoilers: Wednesday, November 20 – Thomas Explains Himself To Hope – Shauna Reassures Ridge

BY hellodrdavis on November 19, 2019 | Comments: one comment
Related : Soap Opera, Spoiler, Television, The Bold and the Beautiful 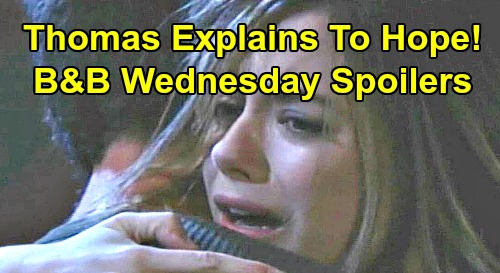 The Bold and the Beautiful spoilers for Wednesday, November 20, tease that things are getting exciting on the CBS drama. But before we get to that, we have a programming note to pass along. There are impeachment hearings scheduled for Wednesday, so there’s a chance that Wednesday’s episode will be pre-empted. But in the event the show airs on Wednesday, here’s what you can expect.

As B&B viewers know, Hope Logan (Annika Noelle) was absolutely floored to see Thomas Forrester (Matthew Atkinson) show up in her bedroom. Hope was sitting alone lamenting her situation and anticipating coming forward about Thomas’ death in the vat of acid. As she was sitting there crying, Thomas walked right in her room and the two had an emotional embrace. Hope was overjoyed to see Thomas, but what will happen next?

Well, first off, Thomas will now have some explaining to do about how he managed to survive his fall. Clearly, the acid wasn’t really acid, and Thomas managed to get himself out of the vat and to safety. But where has he been this whole time? Was it really him in the yellow hazmat suit yelling at Hope to get away from the vat later that night? And why did he stay away?

Since Thomas managed to get onto the grounds of Brooke Forrester’s (Katherine Kelly Lang) mansion and into Hope’s room, then he might have overheard Hope and Brooke talking earlier. As B&B viewers know, Brooke urged Hope to keep Thomas’ fate a secret in order to protect herself. But Hope refused, telling her mother that she had to tell the truth.

That’s something that may endear Hope to Thomas, but it certainly won’t endear Brooke to Thomas. B&B spoilers say that Thomas will want to prove some sort of point, but what could that be? Might he have decided to visit with Hope in order to prevent her from feeling guilty about his “death” and to prove the point that they need each other as co-parents and friends? Perhaps he wants to let her know that he knows she wasn’t intentionally trying to hurt him.

We’ll see exactly what happens here, but ongoing B&B spoilers indicate that Thomas won’t be understanding at all when it comes to Brooke. In fact, it appears that he may be the only reason that Brooke ends up confessing to Ridge Forrester (Thorsten Kaye) that she knew Thomas was “dead” and urged Hope to keep it quiet while withholding the truth from him.

Meanwhile, on the new episode of B&B on Wednesday, November 20, Ridge will spend some time with Shauna Fulton (Denise Richards). It looks like Ridge will need someone to talk to. As B&B viewers know, he’s just found out about the indecent proposal that Thomas made to Hope regarding custody of Douglas Forrester (Henry Joseph Samiri), and the whole thing sickened him.

Ridge was dismayed to hear about how Thomas acted with Hope, and he feels like has failed his son as a father. Shauna will likely encourage Ridge and point out just how much he has done for Thomas. According to B&B spoilers, this will lead to a bit of flirting between Shauna and Ridge as Shauna points out how he has never given on Thomas.

At any rate, it seems that Shauna may get through to Ridge and get him to stop beating himself up so much, as B&B spoilers indicate that Ridge will end up telling Shauna that he may not have lost Thomas after all. That could mean that Ridge ends up hearing from Thomas and gets some reassurance that he’s ok. At any rate, it won’t be long before Thomas is back in Ridge’s orbit.