The Bold and the Beautiful Spoilers: Wednesday, November 6 – Hope Ambushed by Thomas – Steffy Tries To Talk Some Sense Into Brother

BY hellodrdavis on November 5, 2019 | Comments: one comment
Related : Soap Opera, Spoiler, Television, The Bold and the Beautiful 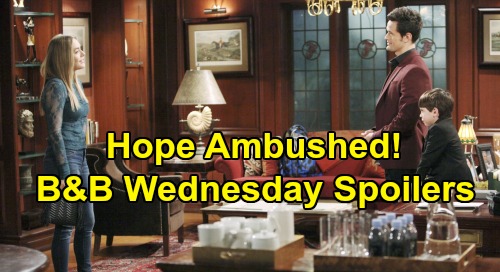 The Bold and the Beautiful spoilers for Wednesday, November 6, tease that Thomas Forrester (Matthew Atkinson) will spend some time with his sister Steffy Forrester (Jacqueline MacInnes Wood). As B&B viewers know, Steffy and Thomas have been estranged ever since Thomas’ involvement in keeping the secret about Beth Spencer (River Davidson and Madeline Valdez) came out. But now it seems that Steffy will want to talk to her brother about a pressing issue – his son and her nephew Douglas Forrester (Henry Joseph Samiri).

Steffy has recently become aware that Thomas is under pressure from Hope Logan (Annika Noelle) and Brooke Forrester (Katherine Kelly Lang) to sign over his parental rights and give at least partial custody of Douglas to Hope. That has infuriated Steffy, who is adamantly against Hope gaining custody of Douglas. Steffy can probably see the larger picture here – that Hope and Brooke think Thomas is unfit and that once Hope gets an ounce of custody, she’s probably going to seek full custody.

Of course, B&B viewers know that this is exactly what Hope has in mind. Her big plan is to manipulate Thomas into getting joint custody of Douglas now, so that she can later petition the court for full and sole legal custody of him, on the grounds that Thomas is unfit. She’s planning to demonstrate for the court how Thomas was willing to use his son as a bargaining chip to get what he wanted.

Steffy is also sensitive to the fact (at least from her perspective) that the Logans are overstepping their bounds and trying to intervene in a family matter. After all, in the event that Thomas were to be unable to care for Douglas or if he were to need help, Steffy surely thinks that it’s the Forresters who should step in to help their own family – not the Logans who aren’t even related to Douglas.

Well, on Wednesday’s episode, Steffy will have a talk with Thomas and try to dissuade him from sharing custody of Douglas with Hope. The Bold and the Beautiful spoilers say she’ll try to get Thomas to see that Hope isn’t interested in him at all and that it’s only Douglas that she’s after. Steffy might relay to Thomas the last argument she had with Hope, during which Hope clearly stated that she wanted Douglas to live with her and Liam Spencer (Scott Clifton).

At any rate, it doesn’t seem that Steffy will have much luck at getting through to Thomas, as B&B spoilers indicate that he’ll later arrange a romantic setup for Hope at Forrester Creations along with Douglas. It seems that Hope will arrive at Forrester under the impression that she’s going to merely talk with Thomas about Douglas’ custody, but when she gets there, she’ll find a whole setup arranged.

Of course, since Douglas will be there, Hope will have to tread carefully, and she might find herself in the position of having to play along with Thomas’ little scenario. But it doesn’t look like she’ll forget her mission and why she’s there in the first place – to get Thomas to sign adoption papers giving her joint custody of Douglas. And from here, a dangerous situation will unfold.

Ongoing B&B spoilers indicate that Thomas will offer up more quid pro quo to Hope for being able to adopt Douglas. And this will all culminate in Hope carrying on a frantic search for Douglas throughout Forrester Creations. It’s all leading up to an explosive conclusion that viewers won’t want to miss, and on Wednesday’s episode we’ll see the lead-up to that big event. Since B&B spoilers indicate that Hope will eventually get custody of Douglas, viewers can expect some big things to happen by week’s end.