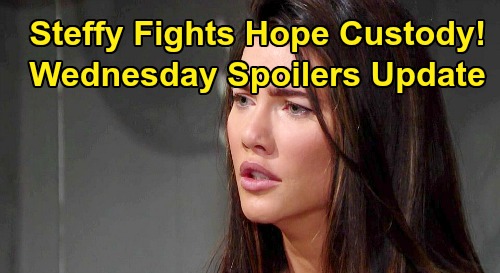 The Bold and the Beautiful (B&B) spoilers update for Wednesday, November 6, teases that Steffy Forrester (Jacqueline MacInnes Wood) will push Thomas Forrester (Matthew Atkinson) to keep his guard up. Although Steffy’s been reluctant to forgive Thomas and move forward, she doesn’t want to see him get scammed by Hope Logan (Annika Noelle). Steffy will insist it’d be a huge mistake to sign the adoption papers and grant Hope joint custody of Douglas Forrester (Henry Joseph Samiri).

Thomas will confess that he’s seriously considering it, but Steffy will try her best to shut down the idea. She may argue that Hope’s just trying to get her foot in the custody door. Once Hope’s got joint custody and has legally adopted Douglas, it’ll make it easier for her to take him away from Thomas entirely. Steffy will likely contend that Hope’s just manipulating Thomas, but B&B fans know he’s giving as good as he gets.

Thomas feels confident that he can turn things around in one night. He just wants to get Hope into bed and work some steamy magic. However, Thomas will probably play up the Douglas angle with Steffy. He may point out that Hope and Douglas have a special bond. Thomas might assure Steffy that he’s got everything under control and intends to do what’s best for his son.

Unfortunately, Thomas is obsessed with Hope and not much else matters at this point. He always makes promises to poor Douglas, but he seems incapable of putting the boy first. The Bold and the Beautiful spoilers say Thomas will drag Douglas into his latest stunt on Wednesday. He’ll get Douglas to help him out with a romantic setup for Hope at Forrester Creations.

When Hope arrives with the adoption papers, she’ll be taken aback – especially by Douglas’ involvement in all this. Hope won’t want to confuse the kid or upset him if she can help it. She’ll be in a tight spot, but it’s only going to get tighter! B&B fans can expect total turmoil before the week wraps up.