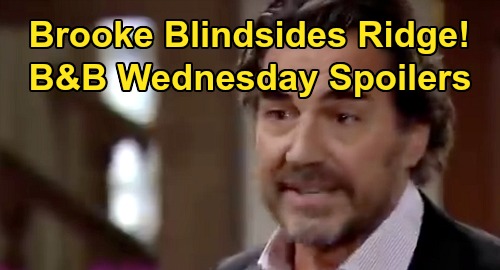 The Bold and the Beautiful spoilers for Wednesday, October 23, tease that Thomas Forrester (Matthew Atkinson) has a big decision ahead of him. As B&B viewers know, he’s just been presented with papers by Brooke Forrester (Katherine Kelly Lang) and Hope Logan (Annika Noelle) that would terminate his parental rights. And Hope has made a big emotional pitch to Thomas giving him all sorts of reasons why she should be the one to raise Douglas Forrester (Henry Joseph Samiri), not him.

Of course, Hope pointed out that Thomas himself pushed so hard for her to become Douglas’ new mother. Thomas is probably kicking himself right about now over fostering a close relationship between Hope and Douglas, since Hope is now trying to use that relationship against him.

Brooke and Hope seem to think that there’s a chance that Thomas is going to sign over his rights to Douglas, paving the way for Hope and Liam Spencer (Scott Clifton) to adopt the little boy. However, they’ll have another thing coming when Thomas refuses to sign the papers. Thomas is determined to get his son back and there’s just no way that he’s going to let the Logans take his child away from him. From Thomas’ perspective, he’s lost so much to the Logans already, and he’s not going to just fork over his child to them.

Of course, at the moment, Thomas is up against Brooke and Hope alone, and he has no backup. But ongoing B&B spoilers indicate that Thomas will soon have some help in his fight to reclaim his son from Ridge Forrester (Thorsten Kaye). Ridge will be horrified and deeply upset to learn that Brooke is the person who drew up the adoption and termination-of-parental-rights paperwork. It looks like Brooke will feel Ridge’s full wrath about the matter by week’s end.

Meanwhile, on the new episode of B&B on Wednesday, October 23, Ridge will spend some time with Steffy Forrester (Jacqueline MacInnes Wood). It looks like while Brooke and Hope are duking it out with Thomas, Ridge will be working to get Steffy to forgive Thomas. That will be a tall order, given the serious animosity that Steffy feels towards her brother right now. Steffy just can’t understand why Thomas didn’t come forward about Beth Spencer (River Davidson and Madeline Valdez).

It appears that during the course of Ridge and Steffy’s conversation, the issue of Thomas’ relationship to Douglas will come up. Steffy might relay the argument she recently had with Hope, during which Hope stated that Douglas would be a part of her new little family with Liam and Beth. That shocked Steffy, and it’s likely that she’ll relay her frustration about the experience to Ridge.

According to B&B spoilers, Ridge will promise Steffy that Douglas will be staying with Thomas. Of course, he’ll be making this promise at the same time that Thomas is dealing with Brooke and Hope in the cabin, and he’ll have no idea that within a few hours, he’ll be finding out that Brooke has drawn up adoption and termination-of-parental-rights paperwork. He knows how Brooke feels about Thomas, but he won’t anticipate that Brooke would try to take legal action against Thomas over the matter.

It certainly looks like all of this is brewing toward a full-scale Logan/Forrester war in which lines will be drawn and sides will the taken. So far, we haven’t seen a true “angry Ridge” come out, as he’s tried to be respectful of Brooke and allow for the possibility of a reconciliation with her. But surely once he finds out that she’s tried to coerce Thomas to sign away his parental rights, things will change, and a real battle will ensue.