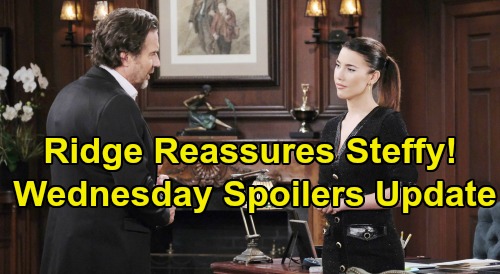 The Bold and the Beautiful (B&B) spoilers update for Wednesday, October 23, teases that Ridge Forrester (Thorsten Kaye) will catch up with Steffy Forrester (Jacqueline MacInnes Wood). He’ll like hear about Steffy’s recent faceoff with Hope Logan (Annika Noelle), but he’ll mainly want to talk about their family. Ridge will still be trying to mend the broken bond between Steffy and Thomas Forrester (Matthew Atkinson).

Thomas made mistakes that hurt Steffy along with everyone else affected by the baby swap scheme and the cover-up that followed. Steffy has been hesitant to forgive her brother, but Ridge will keep pushing for it on Wednesday. He’ll think it’s time for everyone to regain a sense of normalcy. Ridge will likely mention how Thomas is on the right path now and intends to be a better person – especially for his son.

Of course, Steffy might suggest that Hope Logan (Annika Noelle) has a different plan in mind for Douglas Forrester (Henry Joseph Samiri). She may warn Ridge that Hope could push Thomas out, but Ridge won’t think that’s going to happen. He’ll be adamant that Douglas belongs with his father and that’s exactly who’s going to raise him.

However, Ridge is in for a rude awakening when he gets updates on the latest drama. Brooke Forrester (Katherine Kelly Lang) had adoption papers drawn up, and Hope’s completely on board with taking Douglas away from Thomas. She just delivered a passionate pitch in hopes of convincing Thomas to give Douglas up.

The Bold and the Beautiful spoilers say that pitch will continue in Wednesday’s episode. B&B fans can expect Hope to do everything she can to win this argument, but Thomas won’t budge. He’ll refuse to let Hope steal Douglas and cut the boy’s true father out of the picture. Thomas will think all of this is appalling, so there’s no chance he’s signing those papers.

Since Brooke set this round of conflict in motion, Ridge will hit the roof before long. He’ll fiercely defend Thomas later this week and let the Logan woman have it for moving forward with this plot. The Bold and the Beautiful spoilers say some hot drama’s ahead, so stay tuned. We’ll keep you posted as other B&B news comes in. Stick with the CBS soap and don’t forget to check CDL often for the latest Bold and the Beautiful spoilers, updates and news.