BY Heather Hughes on October 9, 2019 | Comments: one comment
Related : Soap Opera, Spoiler, Television, The Bold and the Beautiful 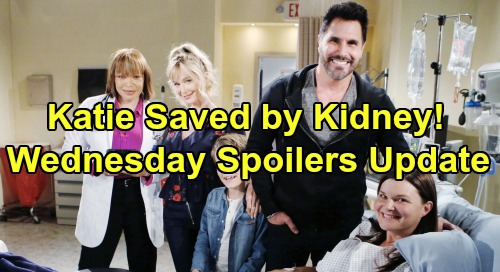 The Bold and the Beautiful (B&B) spoilers update for Wednesday, October 9, teases that Florence “Flo” Fulton (Katrina Bowden) will learn the transplant can move forward. She’ll discover she’s a match for Katie Logan (Heather Tom), so she can save Katie’s life – just like Shauna Fulton (Denise Richards) was hoping. Shauna’s counting on this sacrifice to redeem Flo and make her part of the Logan clan again.

However, Flo will insist she’s going to be an anonymous donor. The news will absolutely floor Shauna, who’ll question why Flo would do such a thing. Flo will be passing up her shot at eternal gratitude from the Logans. Shauna will argue that Flo could earn their adoration and reclaim her spot in the family. She’ll point out that this would score serious points with Wyatt Spencer (Darin Brooks), too.

Even so, Flo just won’t think she could make this about her. She’ll have concerns about Katie rejecting the organ if she knows who’s behind it. Of course, Shauna will think that’s absurd. Katie’s dying and has no other options; she’s not in the position to be picky about whose kidney she accepts.

Still, Flo won’t believe she should take credit for giving the gift of life. She’ll contend that she’s going to save Katie, but she wants her name kept out of it. For the time being, Flo just won’t be willing to budge on this.

The Bold and the Beautiful spoilers say Shauna will be annoyed with her daughter, but she’ll accept Flo’s decision. After all, Shauna could just “accidentally” spill the beans once the procedure’s over. One way or another, the truth about Flo’s kidney donation will be revealed and make waves in the coming weeks.

Until then, Katie will marvel over her guardian angel. B&B fans can expect Katie to get emotional over this gift and what it means. She’ll be overjoyed to know she can stick around and be a mother to Will Spencer (Finnegan George).

Bill Spencer (Don Diamont) will be just as thrilled that Katie has a chance to recover. They’ll once again have hope for a bright future together, but they won’t know Flo’s the reason why – not yet anyway! The Bold and the Beautiful spoilers say Flo’s exposure will bring some interesting reactions in the week ahead.

It sounds like some gripping drama’s coming up, so don’t miss what’s in store. We’ll give you updates as other B&B details emerge. Stay tuned to the CBS soap and don’t forget to check CDL often for the latest Bold and the Beautiful spoilers, updates and news.