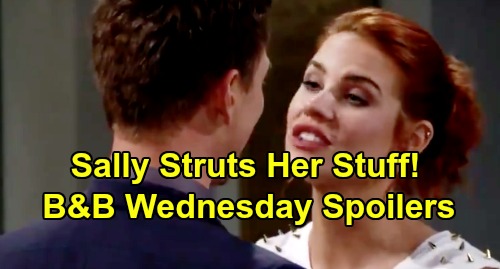 The Bold and the Beautiful spoilers for Wednesday, September 11, tease that Ridge Forrester (Thorsten Kaye) will face an incredibly difficult task. As B&B viewers know, he’s just signed off on an immunity deal for Flo Fulton (Katrina Bowden), and as a result Flo will go free and avoid prosecution for her crimes in connection with Beth Spencer’s (River Davidson and Madeline Valdez) abduction and illegal adoption.

And for that, Flo and Shauna Fulton (Denise Richards) are incredibly grateful. Flo will continue to cooperate with the authorities, and she’ll testify regarding the forging of documents that Reese Buckingham (Wayne Brady) did in connection with Beth’s illegal adoption. But in all other ways, Flo will be a free woman, and that’s going to be difficult for Ridge to explain to his family.

Well, on Wednesday’s B&B episode, Ridge will head home from the jail after signing off on the immunity deal. He’ll immediately encounter Brooke Forrester (Katherine Kelly Lang) at home, and he’ll have to spill the beans about what he did. Don’t expect that conversation to go well, as Brooke’s going to be peeved, both about Flo going free but also about the fact that Ridge unilaterally made the decision.

Look for a full-fledged fight between Ridge and Brooke, as Brooke reels in disbelief at Ridge’s actions. Of course, it won’t be long before she realizes why Ridge agreed to the deal for Flo, which was to protect his son Thomas Forrester (Matthew Atkinson). Ridge knew that if Flo went to trial, all the sordid details about how Thomas threatened Flo and Emma Barber (Nia Sioux) would come to light and be made public.

Ridge might attempt to argue that the decision to keep Flo off the stand and settle things quietly is best for the entire family. He might argue that Hope Logan (Annika Noelle) and Steffy Forrester (Jacqueline MacInnes Wood) would become public news and tabloid fodder if Flo went to trial, and Brooke will know that’s true, but she’ll still feel that Ridge primary agreed to the deal to protect Thomas. And that will infuriate her.

Meanwhile, on the new episode of B&B on Wednesday, September 11, Wyatt Spencer (Darin Brooks) will get a big reminder about who Sally Spectra (Courtney Hope) is and how much she respects herself. It looks like Wyatt and Sally will spend some time together, and Wyatt will have a big request of Sally. He’ll want her to move back into the beach house and resume cohabiting with him.

But it seems that Sally won’t be too keen on the idea. Sure, a big part of her will want to jump right back into a full-fledged relationship and cohabiting situation with Wyatt. But Sally will also find herself wanting to be cautious. After all, it was just a few weeks ago that Wyatt was living happily with Flo. He moved Flo right on into the beach house soon after Sally originally vacated the place, and Sally knows it.

According to B&B spoilers, Sally will give Wyatt a big reminder of her sense of self-worth, so it looks like she’s going to slow Wyatt down a bit. She might refuse to move back in just yet. Perhaps she’ll demand that Wyatt take it easy and not rush things, and she might just ask to be wooed a bit more before she commits to living together again. After all, Sally was really hurt when Wyatt dumped her for Flo, and she needs to look out for herself and her feelings.

At any rate, it seems that Wyatt will respect Sally and the way that she ends up putting her self-worth on full display for him to see. She’ll want him to see her as not so needy and desperate for a relationship, and it sounds like it will definitely work to her advantage.