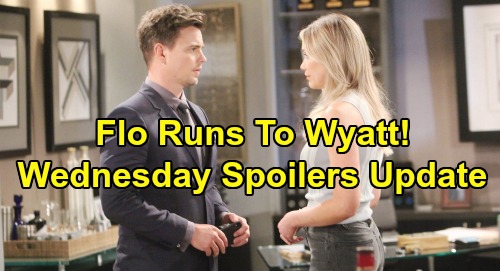 The Bold and the Beautiful (B&B) spoilers update for Wednesday, September 11, tease that Ridge Forrester (Thorsten Kaye) will drop an infuriating bomb. B&B fans know Ridge refused to stand in the way of Florence “Flo” Fulton’s (Katrina Bowden) immunity deal. Since Ridge wanted to do what was best for Thomas Forrester (Matthew Atkinson), letting Flo off the hook was the right call – at least in Ridge’s opinion.

Ridge didn’t want this turning into a public spectacle with dirty details splashed all over the news. Stirring up trouble for Thomas isn’t what Ridge has in mind. He’d much rather see his son concentrate on the future, so he helped Thomas put the past behind him. Unfortunately, that decision will lead to further destruction in Ridge’s marriage.

Ridge and Brooke Forrester (Katherine Kelly Lang) have already been at odds over Thomas, so Ridge’s latest move is only going to make things worse. Brooke will inevitably feel like Ridge is focusing on his son and ignoring their daughters. What about Hope Logan (Annika Noelle) and Steffy Forrester (Jacqueline MacInnes Wood)? Don’t they deserve some justice for the pain they endured?

Those should be questions Brooke poses in some form. She’ll fume since Ridge decided to let the fake birth mom get away with her crimes. Flo gets to move on with her life like she never destroyed families, so Brooke will really be riled. She believes Thomas needs to pay as well, so she won’t approve on any level – especially since Ridge made Flo’s immunity deal decision all on his own.

While Ridge defends himself against Brooke’s fury, Sally Spectra (Courtney Hope) will prove she’s got some self-worth. The Bold and the Beautiful spoilers say Wyatt Spencer (Darin Brooks) will fall fast and hard again. He’ll push Sally to move back in the beach house, but she’ll pump the brakes for the sake of her own heart.

Although Sally loves Wyatt, it’s risky to rush their reunion along. Sally will want to take this one step at a time and move slowly. She’ll think it’s important to reestablish some trust and give Wyatt a chance to prove he’s all in. It’s a much better plan than just going for it and getting her heart smashed into a million pieces.

The Bold and the Beautiful spoilers say Wyatt will respect Sally and her choices. He’ll just try to be patient and show Sally that he’s willing to play by her rules. Sally’s right to be wary since Flo will hope to win Wyatt back in the weeks ahead! We’ll give you updates as other B&B details emerge. Stay tuned to the CBS soap and don’t forget to check CDL often for the latest Bold and the Beautiful spoilers, updates and news.