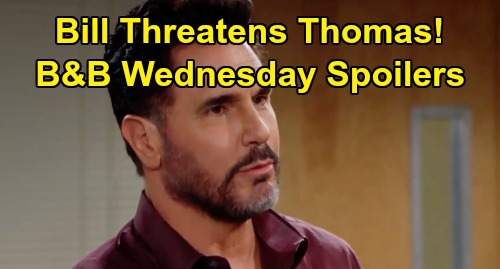 The Bold and the Beautiful spoilers for Wednesday, September 4, tease that Ridge Forrester (Thorsten Kaye) will find himself losing his patience. As B&B viewers know, he couldn’t take dealing with Brooke Forrester (Katherine Kelly Lang) anymore and he went to visit with Flo Fulton (Katrina Bowden) at the jail. Of course, he did more ranting than visiting, and he ended up promising a distraught Flo that he would make sure that she suffers until the last broken heart is mended.

Flo really didn’t offer any excuses to Ridge during his monologue; she just listened quietly and let him vent. There’s not much she can say to defend what she did, since she knows that she was completely in the wrong. But one thing that Flo has been adamant about is that Thomas Forrester (Matthew Atkinson) was in the wrong, too. She told Ridge how Thomas had threatened her, and it looks like they’ll revisit Thomas’ wrongdoing on Wednesday’s episode.

Of course, Thomas’ involvement in perpetuating the Beth Spencer (River Davidson and Madeline Valdez) secret is a touchy subject with Ridge. Ridge knows that his son made some horrible mistakes and kept the truth from Hope Logan (Annika Noelle) for his own personal gain, but Ridge also feels that Thomas would never have been in the position to perpetuate the Beth secret if Flo had just done the right thing in the first place.

As far as Ridge is concerned, Reese Buckingham (Wayne Brady) and Flo started this whole mess, and Flo could have come forward right after Beth was kidnapped by Reese and stopped the whole thing. Beth could have been returned to Hope and Liam Spencer (Scott Clifton) months ago, long before Thomas even got involved. That means that Steffy Forrester (Jacqueline MacInnes Wood) wouldn’t have adopted Beth and bonded with her, so Flo could have prevented 100% of Steffy’s pain.

And Flo could have prevented the whole situation on the cliff with Thomas and Brooke as well. Of course, Ridge is furious with Reese, too, but Reese wasn’t family like Flo was. Since Flo is a Logan, Ridge expected more of her, and on Wednesday’s episode, look for him to rail against Flo some more. He’ll want answers about what she was thinking, yet nothing she says will satisfy him, and he’ll find himself getting angrier and angrier.

At any rate, it won’t be a good scene as Ridge finally explodes at Flo, promising her that she’ll get what she deserves. Of course, since there are no plans for Katrina Bowden, who portrays Flo, to leave the show, it looks like Flo will likely beat the most serious charges against her, or perhaps she’ll even end up getting a plea deal for testifying against Reese. Whatever the case, Ridge won’t be happy about that development, either.

Meanwhile, on the new episode of B&B on Wednesday, September 4, Bill Spencer (Don Diamont) will find himself enraged as well, but the target of his rage will be someone entirely different than Flo. Of course, Bill blames Flo heavily for the fact that Hope and Liam were without their daughter for so long, but he feels that Flo is already getting what she deserves, since she’s in jail.

Bill’s not so happy about what’s going on with Thomas, though. Bill is outraged that Thomas may skate by after he kept the secret about Beth’s existence for so long. Plus, Bill’s irritated that Thomas deliberately interfered in Hope and Liam’s marriage and then manipulated Hope into marrying him. The more Bill thinks about it, the more irritated he gets, and he’s finding himself determined to make Thomas pay.

On Wednesday’s episode, Bill will decide to give Thomas a piece of his mind, so he’ll head to the hospital where Thomas is convalescing. Look for Bill to rail against Thomas with just as much force as Ridge railed against Flo. Bill will probably let Thomas know that when you mess with one Spencer, you mess with all the Spencers, and that he’s going to make sure that Thomas pays the price for what he did to Liam, Hope, and Beth.

Of course, it’s not entirely clear which version of Thomas Bill is going to encounter. Last viewers saw Thomas on screen, he was the apologetic Thomas who wanted to make amends and explain himself. But for all we know, Bill’s attitude could bring out Thomas’ darker side, and Thomas could end up giving as well as he gets. It should be interesting to watch this interaction, since Bill has a lot to get off his chest and Thomas has a lot to lose.

After all, Thomas remains quite vulnerable when it comes to his actions on the night of Emma Barber’s (Nia Sioux) fatal car accident. If Bill’s smart, then he’ll consider how to best target Thomas, and that would certainly be to find hard evidence of Thomas’ involvement in causing Emma’s accident. Ongoing B&B spoilers indicate that Bill and Brooke will embark on a journey to find hard evidence against Thomas, so looking into Emma’s accident might be their next objective.