BY Heather Hughes on November 28, 2019 | Comments: one comment
Related : Soap Opera, Spoiler, Television, The Bold and the Beautiful 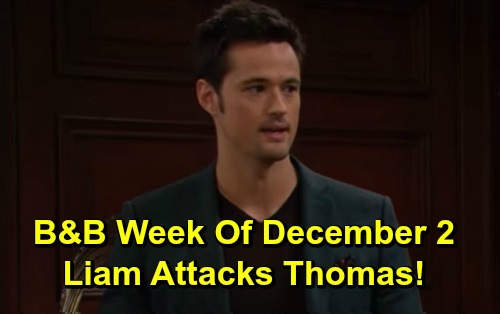 The Bold and the Beautiful (B&B) spoilers for the week of December 2-6 tease that some stunning moments are on the way. First, Sally Spectra (Courtney Hope) will say the wrong name during a cozy scene with Wyatt Spencer (Darin Brooks). Their wedding date discussion will be derailed when Sally inadvertently calls him “Liam.” Wyatt will want answers – most likely about whether Sally still has lingering feelings for Liam Spencer (Scott Clifton). He needs to know if Sally’s in love with his brother.

The good news is it’ll seemingly be a genuine mistake on Sally’s part. The bad news is Wyatt’s own lingering feelings could be the real problem. Wyatt clearly has a lot of love left in his heart for Florence “Flo” Fulton (Katrina Bowden). Sally will propose a quick elopement and try to hang onto her man, but she may be fighting a losing battle. B&B buzz is that Sally faces eventual rejection by Wyatt.

Speaking of battles, there’ll be plenty of those happening in the week ahead. The Bold and the Beautiful spoilers say Ridge Forrester (Thorsten Kaye) and Steffy Forrester (Jacqueline MacInnes Wood) will unleash their wrath. They’ll blast Thomas Forrester (Matthew Atkinson) for his indecent proposal and scold him for giving Hope Logan (Annika Noelle) joint custody rights.

Later, Steffy will lash out at Hope for pursuing custody of Douglas Forrester (Henry Joseph Samiri) in the first place. She won’t be pleased about Hope’s recent deception either. Steffy will let Hope have it for covering up Thomas’ presumed death all while knowing she was responsible.

As for Shauna Fulton (Denise Richards), she’ll determine that she has to tell Ridge how she really feels. Shauna will declare her love for Ridge and get a steamy kiss in return. After Quinn Forrester (Rena Sofer) spots that lip lock, she’ll corner Shauna and wonder what she thinks she’s doing. Quinn won’t approve of Shauna making her move for many reasons, but Shauna will think this feels right.

After Ridge has the divorce papers drawn up, he’ll give Brooke one last chance to change his mind. Ridge will argue that if Brooke can forgive Thomas and find a way to accept him, he’s willing to work on their marriage. However, Brooke will have her own reunion ultimatum. The Bold and the Beautiful spoilers suggest Brooke and Ridge won’t be able to get on the same page, so those divorce papers may be signed soon.

Until then, Thomas will get into a heated argument with Liam. After Liam gets back to work at Spencer Publications and enjoys some family time for Thanksgiving, he’ll have this shouting match with Thomas. B&B spoilers say it’ll convince Thomas he has to pull out all the stops with Hope. He’ll want to rev up his efforts to steal Hope away from Liam.

Thomas will make a tempting offer and encourage Hope to work with him on the Hope for the Future line. The Bold and the Beautiful spoilers say Thomas will use Douglas as an insurance policy. He may tell the kid how great it’d be if Daddy and Mommy Hope were working together. Douglas might be coached to praise the idea to his new mom.

Hope will face growing pressure, so she’ll probably cave in before long. We’ll give you updates as other B&B details emerge. Stay tuned to the CBS soap and don’t forget to check CDL often for the latest Bold and the Beautiful spoilers, updates and news.