BY Heather Hughes on December 19, 2019 | Comments: one comment
Related : Soap Opera, Spoiler, Television, The Bold and the Beautiful 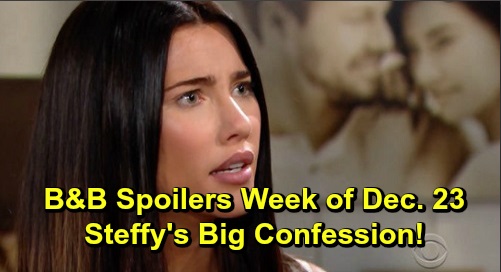 The Bold and the Beautiful (B&B) spoilers for the week of December 23-27 tease that we’ll see plenty of scheming. For starters, Thomas Forrester (Matthew Atkinson) will be brimming with confidence. His plan to win Hope Logan’s (Annika Noelle) heart will move forward, but he’ll have to keep up the reformed act around Forrester Creations.

Thomas will call a family meeting at the office just to offer his gratitude. He’ll insist he’s so thankful that everyone’s giving up all this support – and that’ll include Hope. Since no one else will be available to design for the fashion showdown, Hope will reluctantly team up with Thomas. She’ll slowly start to believe he could truly be moving on.

Thomas will continue to flaunt his interest in Zoe Buckingham (Kiara Barnes), which will leave her torn when it comes to loyalty. It sounds like Zoe will find herself falling harder and harder, so Steffy Forrester (Jacqueline MacInnes Wood) and Liam Spencer (Scott Clifton) could have a problem on their hands.

B&B spoilers say Zoe will end up taking a big step forward with Thomas. Will they land in bed together? Regardless, smitten Zoe isn’t exactly what Liam and Steffy had in mind! They need Zoe’s help to uncover the truth about Thomas, but she won’t be the only problematic character in the week ahead.

Brooke Forrester (Katherine Kelly Lang) will hear about Steffy’s decision to rehire Zoe – presumably from a furious Hope. Naturally, Brooke will go into Mama bear mode and rip into Steffy. She’ll wonder what Steffy was thinking, but Steffy will insist Brooke’s got it all wrong. The Bold and the Beautiful spoilers say Steffy will admit it’s all part of a plot to expose Thomas, so Brooke will be both impressed and offended.

Although Brooke will be happy about the endgame here, she won’t like that she was left in the dark. It won’t be long until Liam gets an earful. Brooke will rant about not being included and will undoubtedly want in once she knows what’s up. She’ll hope that they can prove Thomas is as conniving as ever.

Steffy, on the other hand, will hold out hope that Thomas has changed. As for Liam, he’ll grow increasingly concerned about the lengths Thomas will go to. Liam’s seen first-hand out dangerous Thomas can be. He’ll fret about Hope and worry that Thomas could do something crazy.

Over with Sally Spectra (Courtney Hope), she’ll be excited about the fashion battle that’s brewing. Sally will help Steffy prep with some new designs and will look forward to competing against Thomas. The Bold and the Beautiful spoilers say Steffy will spend more time with Sally, so they’ll bond as they work. In fact, Steffy will end up making a confession about Liam and getting some advice from Sally.