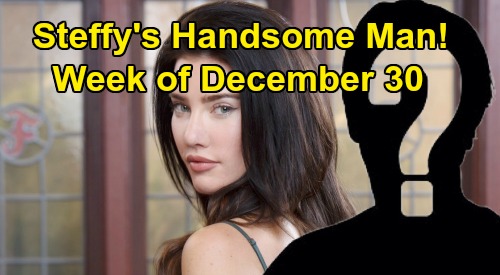 The Bold and the Beautiful (B&B) spoilers for the week of December 30 to January 3 tease that things will get complicated on the CBS soap. Of course, complicated is a way of life for Thomas Forrester (Matthew Atkinson)! He’s currently working on a scheme to make Hope Logan (Annika Noelle) love him, which involves seducing Zoe Buckingham (Kiara Barnes).

After a hot date with Zoe, Thomas will take the next step with her. It won’t be hard to get Zoe into bed since she clearly has feelings for Thomas. Zoe will hate that she’s falling so hard and putting half her job in jeopardy.

B&B fans know Zoe was rehired at Forrester Creations, but serving as a double agent was part of the deal. Zoe will know she’s risking a lot by hitting the sheets with Thomas, but she won’t be able to help herself. She’ll believe they have a connection and will truly hope Thomas’ interest in her is genuine.

As for Liam Spencer (Scott Clifton), The Bold and the Beautiful spoilers say he’ll grow concerned by the news of this date. Liam will find out Hope agreed to watch Douglas Forrester (Henry Joseph Samiri) so Thomas would have plenty of time with Zoe. He’ll naturally worry Zoe will wind up bed with Thomas and won’t be able to keep a clear head. Liam will see his secret weapon slipping through his fingers.

Later, Liam’s worst fears will be confirmed once he talks to Zoe. She may admit they made love and strengthened their bond. Zoe will rush to Thomas’ defense and will undoubtedly argue that he wouldn’t use her – not like that! She may contend that Thomas’ feelings must be authentic, but they won’t be just yet.

Although Thomas will change his tune down the road, he’ll remain focused on Hope for now. Thomas will keep his eye on the prize, but he’ll still believe flaunting his Zoe romance is the way to go. At the same time, Thomas will try to draw Hope in. The Bold and the Beautiful spoilers say all of this will leave Hope confused and unsettled. She’ll struggle to deal with Thomas’ bizarre behavior in the week ahead.

Thomas will once again leave Hope on edge with a big surprise. He can’t make a grand gesture of love, so it may be something involving Zoe. Will Thomas arrange for Hope to catch them in bed together? That’s one option to consider. Thomas will definitely do whatever he can to play this game and win big.

Over with Brooke Forrester (Katherine Kelly Lang) and Ridge Forrester (Thorsten Kaye), they’ll reflect on the past. Ridge and Brooke will take a walk down memory lane, which should help them remember why they love each other. Unfortunately, they’ll also remember why they’re constantly fighting. Thomas has been a real source of contention and will continue to be one in the coming weeks.

Due to recent preemptions, these next Bold and the Beautiful spoilers may not play out until the following week, but we’ll mention them just in case. It never hurts to know a little more in advance! Steffy Forrester (Jacqueline MacInnes Wood) will be charmed and flattered when a new hunk gets his flirt on. A handsome fella at Forrester Creations will be drawn to Steffy, so it won’t be long until she gets asked out.

It sounds like some great scenes are on the way. We’ll give you updates as other B&B news emerges. Stay tuned to the CBS soap and don’t forget to check CDL often for the latest Bold and the Beautiful spoilers, updates and news.