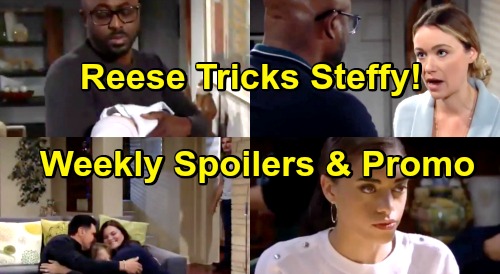 The Bold and the Beautiful (B&B) spoilers for the week of January 21-25 tease that an alliance will be tested on the CBS soap. Dr. Reese Buckingham (Wayne Brady) summoned Florence aka “Flo” as part of his sneaky plan, but she’s in the dark on most of the baby details. That’ll change soon enough!

Flo understands that Dr. Taylor Hayes (Hunter Tylo) and Steffy Forrester (Jacqueline MacInnes Wood) can’t know about the real mother. She just doesn’t know why or where this baby came from. Flo has been pretty cooperative so far, but she’ll push back on this week’s new B&B episodes, January 21-25. It looks like Flo will worry about what she’s got herself wrapped up in. She won’t want to go down for whatever Reese has cooked up.

The Bold and the Beautiful spoilers say Flo will confront Reese about his crazy scheme. She’ll insist she needs to know how Reese ended up with this baby and she needs to know NOW! Reese will have no choice but to come clean. If he doesn’t, Flo could blab to Steffy or Taylor and spoil everything. Reese will realize he needs to tug at Flo’s heartstrings or this could turn into a total disaster.

B&B fans can expect Reese to confess what he’s up against. He’ll admit that thugs are after Zoe Buckingham (Kiara Barnes), so she’s in extreme danger. Reese will argue that his daughter’s life depends on what he does next. He may not reveal every last bit of info, but he’ll give Flo enough to satisfy her.

However, Flo will be concerned about her role in all this. She won’t know if anything can really justify what Reese is doing, but he’ll maintain that he has to protect Zoe. Reese will refuse to let Zoe be injured or killed over his own gambling debt. He’ll beg Flo to stay on board, so she’ll reluctantly agree.

Flo herself could land in harm’s way if things go south, but they’ve come too far to back out now. Reese and Flo will just have to hope it all works out. Later, a talent show will begin as the thugs grow impatient. Reese will put his own life on the line to save Zoe from harm at this event.

The good news is Steffy will finalize the adoption soon and Reese’s troubles will be over. The bad news is Hope Spencer (Annika Noelle) and Liam Spencer (Scott Clifton) will remain without their baby! Reese has obviously stolen Beth Spencer to score fast cash, so his secret’s bound to blow up down the road.

In the meantime, Thorne Forrester (Ingo Rademacher) will talk to Katie Forrester (Heather Tom) about the risks of love. He’ll think it’s dangerous to open your heart to someone. Katie won’t seem to get the picture, but B&B viewers do. It sounds like Thorne’s heart is breaking as Katie drifts back toward Bill Spencer (Don Diamont).