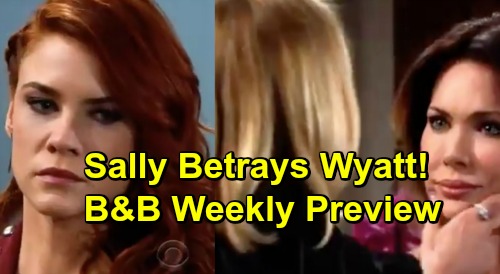 The Bold and the Beautiful (B&B) spoilers for the week of March 25-29 tease that we’ll see some big surprises. First, let’s talk about Sally Spectra (Courtney Hope) and an enticing offer. Ridge Forrester (Thorsten Kaye) will be quite impressed when he checks out Sally’s new athletic line. He’ll think she’s got the talent they need to take Forrester Creations to the next level.

Ridge won’t want Sally’s gift to slip away, so he’ll push her to stay at FC. Of course, this is a problem since Sally just made a deal with Bill Spencer (Don Diamont). Wyatt Spencer (Darin Brooks) worked hard to make Sally’s dreams come true, so she’ll be worried about betraying him. It appears Sally will shut down Ridge’s plan at first, but he’ll keep pushing. He’ll argue Sally should at least think about the offer.

Brooke Forrester (Katherine Kelly Lang) and Eric Forrester (John McCook) will also urge Sally to stick around. They’ll agree she’s got an eye for design and needs to put it to good use. Ridge may point out that Bill can’t be trusted, so why not stay where she’s wanted and needed? Bill had to be forced into that deal, but Ridge will happily throw money at Sally and give her a nice promotion.

Sally will be taking a huge gamble if she pursues a fashion house revival. The safe choice may be the more appealing one here. However, Sally will insist on talking to Wyatt before she makes her decision. The Bold and the Beautiful spoilers say that’ll turn into a fight about their future.

Wyatt won’t understand why Sally would even consider something like this. They were supposed to rebuild the Spectra legacy, but Sally will be looking to bail. In the end, Sally will have to put herself first. Whether that means starting Spencer Fashions or changing the plan, Sally has to choose the path she feels is right.

Other Bold and the Beautiful spoilers say Brooke will threaten Dr. Taylor Hayes (Hunter Tylo). That kiss between Ridge and Taylor will lead to more feuding, so we’ll see some explosive moments. B&B fans can expect Brooke to offer a stern warning. She’ll make it clear that she’s not giving Ridge up without a fight!

As their verbal conflict turns physical, Ridge will manage to break things up. He’ll be concerned about their latest war, but it’s out of his hands now. Taylor and Brooke will do their worst to each other in the weeks ahead. We’ll give you updates as other B&B news comes in. Stay tuned to the CBS soap and don’t forget to check CDL often for the latest Bold and the Beautiful spoilers, updates, and news.