BY Heather Hughes on November 21, 2019 | Comments: one comment
Related : Soap Opera, Spoiler, Television, The Bold and the Beautiful 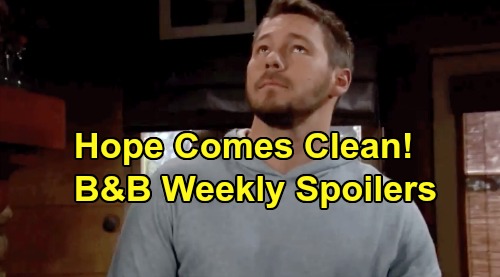 The Bold and the Beautiful (B&B) spoilers for the week of November 25-29 tease that some surprises are in store. We should note that due to impeachment hearings coverage, past preemptions as well as future ones could alter the schedule. However, we wanted to give you a heads-up on what’s ahead, and you can count on all this to play out eventually.

For starters, Brooke Logan’s (Katherine Kelly Lang) confession will rock Ridge Forrester (Thorsten Kaye) to the core and completely shatter her marriage. If there was any hope of saving “Bridge,” Brooke will smash it by revealing her brief cover-up of Thomas Forrester’s (Matthew Atkinson) “death.” She’ll defend her decision to conceal it along with Hope Logan’s (Annika Noelle) involvement, but Ridge just won’t think there’s any way to justify it.

B&B spoilers say Ridge won’t be able to look at Brooke the same way anymore. He’ll declare their relationship over and walk out on Brooke, so she’ll have a heartbreaking tale to tell. After Hope helps Thomas fill Douglas Forrester (Henry Joseph Samiri) in on her official Mommy status, she’ll get updates on Brooke and Ridge’s split. Hope should feel terrible about her role in it, but Brooke will put the blame on Thomas. She’ll remain furious with Thomas for letting Hope think he was dead.

Liam Spencer (Scott Clifton) will also hear about Brooke and Ridge’s breakup, so he’s going to have questions. The answers will require Hope to come clean, so that’s exactly what she’ll do. The Bold and the Beautiful spoilers say Liam will be stunned by the whole ugly story. Hope will reveal all the details that led up to Thomas’ fall in the vat and describe her relief over his sudden return.

Meanwhile, Ridge will bring Shauna Fulton (Denise Richards) up to speed on confrontation with Brooke. Shauna’s reaction will catch Ridge off guard, so maybe she’ll suggest she’s not sorry “Bridge” is over. Of course, Shauna will hate that Ridge is in pain, but she won’t hate the idea of him being single and ready for new love at some point.

The Bold and the Beautiful spoilers say Shauna and Ridge will share another kiss, which Quinn Forrester (Rena Sofer) will witness. She’ll force Shauna to come clean later and try to get a grip on what’s really happening here. Quinn probably didn’t think Shauna would take her pursuit of Ridge this far – especially not so quickly.

As for Thomas, he’ll be cornered and scolded by a couple of concerned family members. Ridge and Steffy Forrester (Jacqueline MacInnes Wood) will make it clear that Thomas’ recent quid pro quo with Hope was unacceptable. It wasn’t a good idea to lock Douglas up alone and chase Hope through Forrester Creations either. There’s also the matter of letting Hope believe he died, so Thomas will have a lot to own up to.

Nevertheless, Thomas will spin this as best as he can and hope to earn another chance. He might argue that Hope’s giving him one and promise they’re moving forward as loving parents to Douglas.