The Bold and the Beautiful Spoilers: Week of September 16 Preview – Wyatt Torn Between Sally & Flo – Ridge Lies To Brooke About Shauna 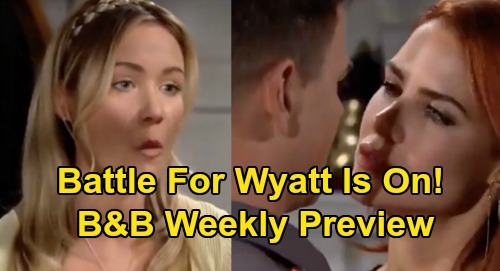 The Bold and the Beautiful (B&B) spoilers preview for the week of September 16-20 tease that some tricky situations are coming up. For starters, we’re building toward a very torn Wyatt Spencer (Darin Brooks). He’s ready to get his future with Sally Spectra (Courtney Hope) back on track, but Sally’s been hesitant to jump right in again. Meanwhile, Florence “Flo” Fulton (Katrina Bowden) is beyond ready to repair the damage with Wyatt and win him back.

The good news is a little competition will push Sally to speed things up. The bad news is Wyatt will also soften toward Flo. He’ll be in a difficult position as he most likely fights his feelings for Flo and convinces himself he’s all in on Sally. B&B spoilers say Sally will admit they’re so good together. She’ll think they can be again, so they’ll get sizzling at the beach house.

However, Flo won’t just give up without a fight. She’ll make it clear that she’ll do whatever it takes to earn Wyatt’s trust back, so her declaration will definitely affect him. The Bold and the Beautiful spoilers say Flo will score some compassion. Wyatt will show sympathy for his ex, which sounds a bit dangerous – especially in this waffling world of B&B!

Even so, it appears Wyatt will stick with Sally for now. He was burned horribly by Flo’s deception, so he won’t be eager to take a gamble on her just yet. Elsewhere, Ridge Forrester (Thorsten Kaye) will deal with the aftermath of his drunken night. He’ll awaken in bed with Shauna Fulton (Denise Richards) and worry about what might’ve transpired the night before.

A kiss and some smuggling are thankfully all that went down, but Brooke Forrester (Katherine Kelly Lang) still wouldn’t be on board. Their marriage is in an extremely fragile state, so Ridge and Shauna will make a pact of silence. Brooke will fear the worst when she realizes Ridge didn’t come home the night before, but she’ll be relieved when he finally drags himself in. She’ll wonder where he was, so Ridge will suggest there’s something she should know.

Of course, Ridge won’t just blurt out the big secret. He may simply tell Brooke he’s sorry or confess that he got himself completely plastered. Whatever the case, Ridge and Shauna’s strange night together will remain under wraps for a while. Flo will be brought in the loop by her mom, but she certainly won’t spill it! She’ll warn Shauna this had better not get out since Ridge is married to Brooke.