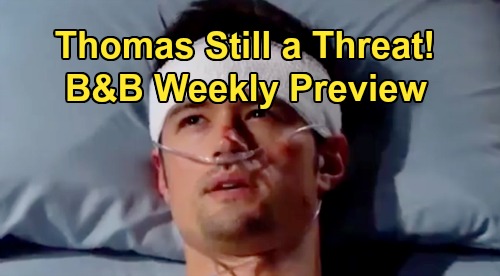 The Bold and the Beautiful (B&B) spoilers for the week of September 2-6 tease that we’ll see a different version of Thomas Forrester (Matthew Atkinson). Thomas came unhinged for a while, but he seems to have regained some control. There also seems to be some genuine remorse over his actions and the pain they caused.

In B&B’s latest promo, Thomas assures everyone that he’s horrified by what he’s done. He also reiterates his love for Hope Logan (Annika Noelle), but she’s certainly not ready to budge on the topic of forgiveness. Thomas may understand that as he continues to show his softer side. Of course, part of that may be an act. It’ll be tough to tell exactly what Thomas is thinking as this story heats up.

Basically, it appears Thomas is still a bit crazy – just not as crazy as before. Thomas will make smarter moves to further his agenda instead of irrational ones that blow up his world. However, Thomas’ past mistakes will be a problem as the Emma Barber (Nia Sioux) investigation presses on. Ridge Forrester (Thorsten Kaye) will continue to face conflict with Brooke Forrester (Katherine Kelly Lang) over the cliff shove as well.

Brooke will feel like Thomas’ obsession with Hope was the real issue. She’ll get fed up with Ridge playing the blame game and trying to act like she’s horrible for defending her daughter. Both Ridge and Thomas will have concerns as Detective Alex Sanchez’s (Jeremy Ray Valdez) murder suspicions grow. The detective will have plenty of questions about Thomas’ role in Emma’s car crash.

Ridge will pay Florence “Flo” Fulton (Katrina Bowden) a visit in jail to seek more Emma info. He’ll be determined to sort through the chaos and find the facts. Flo will insist she thinks Ridge’s son is responsible for a very serious crime. She’ll share her fears that Thomas is a killer and argue that Ridge needs to wise up about the kind of person Thomas is.

The Bold and the Beautiful spoilers say Ridge will want Thomas’ version of events later. Thomas will tell the truth about what happened that night, which will bring Ridge’s fierce outburst. Although Thomas didn’t murder Emma in cold blood, he was a factor in her death and never bothered to call for help.

Even so, Ridge will be determined to help Thomas avoid legal consequences. As for Bill Spencer (Don Diamont), he’ll working just as hard to take Thomas down. Bill’s love for Brooke will fuel his fight to expose Thomas’ sociopathic tendencies and put him behind bars. He’ll stop by Thomas’ hospital room to promise that justice will be done.

Thomas will wonder if that’s a threat, so Bill may have no qualms about admitting that it is! The Bold and the Beautiful spoilers say some great action’s coming up, so stay tuned. We’ll give you updates as other B&B news comes in. Stick with the CBS soap and don’t forget to check CDL often for the latest Bold and the Beautiful spoilers, updates and news.