BY Heather Hughes on September 19, 2019 | Comments: one comment
Related : Soap Opera, Spoiler, Television, The Bold and the Beautiful 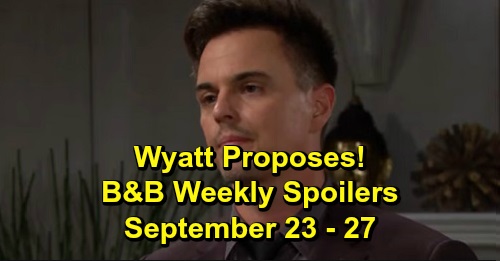 The Bold and the Beautiful (B&B) spoilers for the week of September 23-27 tease that some big decisions are coming up. First, let’s talk about a very conflicted Wyatt Spencer (Darin Brooks). Part of him will want to take Florence “Flo” Fulton (Katrina Bowden) back and forget her mistakes. Another part of him will want to put Flo in the rearview mirror and stick with Sally Spectra (Courtney Hope).

In the end, Wyatt will decide Sally’s his girl – forever if she’ll take him. That’s right. It’s time for another B&B marriage proposal! The Bold and the Beautiful spoilers say Wyatt will pop the question to Sally, but how will she respond? Sally may need some time to mull this over since she’s already been wary. She’s made it clear that she doesn’t want to move too fast, so she’ll definitely be thrown by Wyatt’s daring gesture.

Later, Quinn Forrester (Rena Sofer) will make her position clear to Eric Forrester (John McCook) and then Wyatt. She’ll insist her son should break up with Sally and make Flo his main squeeze again. Quinn will think Flo’s deeply sorry for her baby blunders and deserves another chance. She’ll push Wyatt to give Flo one, but he may be more nervous about Sally’s answer to his marriage proposal.

There’s a chance Sally will reject Wyatt on the spot instead, but a delayed answer makes the most sense. Whatever the case, Quinn will support Wyatt as a mom – and as Flo’s biggest fan. She’ll undoubtedly keep trying to steer him in the direction she wants.

Over with Bill Spencer (Don Diamont), he’ll worry about Katie Logan (Heather Tom) following her collapse. The Bold and the Beautiful spoilers say Bill will fret by unconscious Katie’s bedside and declare his undying love. He’ll urge Katie to hang in there as Dr. Jordan Armstrong (Vincent Irizarry) tries to figure out what’s wrong. Unfortunately, the answer will be kidney failure. Both Katie’s kidneys will be kaput, so she’ll need a new one ASAP.

Over with Ridge Forrester (Thorsten Kaye), he’ll catch Thomas Forrester (Matthew Atkinson) doing something he shouldn’t. Thomas will sneak an unsupervised visit with Douglas Forrester (Henry Joseph Samiri), which will unsettle Ridge. Despite Thomas’ efforts to cover up his deliberate rule-breaking, Ridge may see that his son’s still quite manipulative.

That’ll lead Ridge to mull some things over and eventually make a difficult decision. As for Shauna Fulton (Denise Richards), she’ll provoke Flo’s fury by fantasizing about Ridge. Shauna won’t be able to stop herself from imagining their life together. She’ll think she’d be Ridge’s perfect match, so Flo will fume and urge her mom to cut it out.

Afterward, Shauna will more than happy to give Ridge the guidance she needs. She’ll be instrumental in helping him make that decision we mentioned. It sounds like Ridge and Shauna will continue their dangerous bonding! We’ll give you updates as other B&B news comes in. Stay tuned to the CBS soap and don’t forget to check CDL often for the latest Bold and the Beautiful spoilers, updates and news.