The Bold and the Beautiful Spoilers: Who Is That Baby – Is it Beth, Or Does Reese Have Another Infant For Steffy?

BY hellodrdavis on January 15, 2019 | Comments: 2 comments
Related : Soap Opera, Spoiler, Television, The Bold and the Beautiful 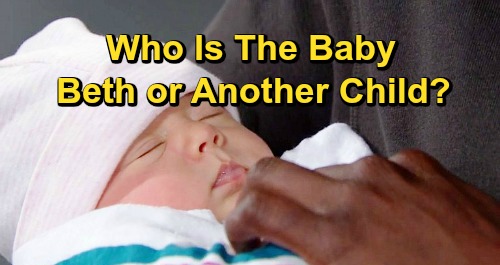 The Bold and the Beautiful spoilers tease that Taylor Hayes (Hunter Tylo) will persuade Steffy Forrester (Jacqueline MacInnes Wood) to adopt the baby that Reese Buckingham (Wayne Brady) has offered as being available for adoption. As CDL has reported, there is every indication that Steffy will adopt this baby and name her “Phoebe” after her late sister.

But there’s a lot of mystery surrounding this baby. The story Reese is currently selling is that Florence (Katrina Bowden) is the baby’s mother, and that she wants to give her baby up for adoption to give it better life than she can provide. The story sounds good, but perhaps it’s just too good to be true.

B&B spoilers say that Florence will end up being an old friend of Reese’s, so it seems that there are holes in Florence’s story. The baby is likely from somewhere else. But where?

Well, one theory is that this baby is actually Beth Spencer, and that Reese kidnapped her after an unconscious Hope Spencer (Annika Noelle) gave birth. So the theory goes, Reese presented Hope and Liam Spencer (Scott Clifton) with a dead infant that was born at the clinic earlier that evening to trick them into believing that Beth had died.

Proponents of this theory point to the young woman who was present at the clinic earlier in the evening before Hope gave birth. This young woman looked very sad, and Reese told her that “it wasn’t your fault.” It’s possible that the dead infant that Reese presented to Hope and Liam was actually this young woman’s baby.

But perhaps there’s another explanation for Reese suddenly having a baby for Steffy to adopt. It’s always possible that Beth indeed died due to a placental abruption, just like Reese said. But then how would one explain the young woman at the clinic? Well, perhaps the young woman gave birth to a healthy baby but decided to put it up for adoption.

She might have felt very guilty about leaving her baby at the clinic for someone else to raise, prompting Reese to tell her “it wasn’t your fault.” If that’s the case, then it would mean that the baby that Reese wants Steffy to adopt is actually this young woman’s baby, and not Beth.

That’s two very different takes on the same evidence. What’s your take? Where do you think the baby that Reese is offering came from? Stay tuned to the CBS soap and don’t forget to check CDL often for the latest Bold and the Beautiful spoilers, updates, and news.