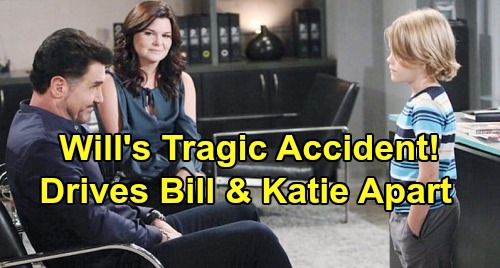 The Bold and the Beautiful (B&B) spoilers tease that another tragedy will strike. Several B&B characters are still reeling from the last one, which involved Brooke Forrester’s (Katherine Kelly Lang) shove and Thomas Forrester’s (Matthew Atkinson) horrific fall off the cliff. Ridge Forrester (Thorsten Kaye) is playing the blame game and refusing to buy Brooke’s claims, so their marriage is definitely suffering right now.

Of course, Thomas remains in bad shape as well. He’s got a long road ahead of him, so this whole situation is sure to bring more drama. However, The Bold and the Beautiful spoilers say another major crisis will hit during the week of September 16-20. This one will involve Bill Spencer (Don Diamont) and Katie Logan (Heather Tom) in particular.

This could be a way to set up some issues for Bill and Katie, especially now that “Bridge” is on the verge of destruction. Bill and Brooke always seem to find their way back to each other, so B&B may be planning on another “Brill” redo. Regardless, there’ll be some problems for Bill and Katie leading up to this tragedy.

During the week of September 2-6, The Bold and the Beautiful spoilers say Bill will rush to Brooke’s defense. He’ll stick up for Brooke during a conversation with Katie, so that’s an interesting tidbit. Katie may be somewhat understanding about Ridge’s feelings in all this. She might argue that Ridge almost lost his son and is just lashing out because of it.

Katie might even put herself in Ridge’s shoes and contend that she’d be a mess, too. As for Bill, he’s made it clear that Thomas got what he had coming. That fall was karma as far as Bill’s concerned, so he’ll be “Team Brooke” all the way. It could cause some crucial conflict as we gear up for that tragedy a couple weeks later.

We mentioned that Katie might put herself in Ridge’s shoes, but B&B could actually put her in a similar situation. After all, a tragedy involving Will Spencer (Finnegan George) makes the most sense here. Besides Brooke, there’s nobody else that Bill and Katie would both care enough about for it to be a specific spoiler.

Will This Lead To Katie Logan And Bill Spencer Trading Partners?

Although some Brooke danger is a possibility, she seems too tied to the whole Logan and Forrester clan for it to be about her. It wouldn’t be so focused on Bill and Katie – Will’s parents. This info makes it sound more like Will’s going to face an accident.

If Bill’s negligence or a bad decision causes that accident, perhaps that could drive a wedge between Bill and Katie. It could make Katie even more sympathetic to Ridge and help Bill relate to Brooke even more as well. Will Bill and Katie trade partners? A Katie and Ridge reboot doesn’t seem like a sure thing, but Brooke and Bill’s reunion might be inevitable.