The Bold and the Beautiful Spoilers: Wyatt Done Chasing After Liam’s Women – Sally Struggles to Convince Fiance She’s Over His Brother

BY Heather Hughes on November 30, 2019 | Comments: one comment
Related : Soap Opera, Spoiler, Television, The Bold and the Beautiful 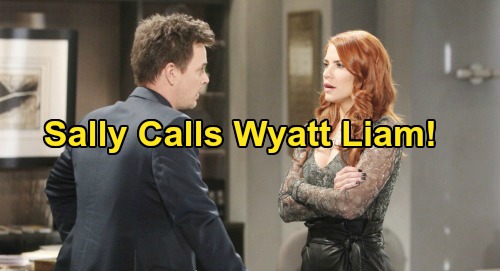 The Bold and the Beautiful (B&B) spoilers tease that Sally Spectra’s (Courtney Hope) slipup will leave her scrambling. On December 2, Sally will inadvertently call Wyatt Spencer (Darin Brooks) by the wrong name. That blunder might not be so bad if the name wasn’t “Liam”! Of course, Liam Spencer (Scott Clifton) is Wyatt’s brother – and they’ve been known to pass women back and forth.

Sally won’t even realize she’s made the mistake until Wyatt calls it to her attention. She’ll deny that she did it at first, but Wyatt will insist she called him “Liam.” Naturally, Wyatt will want to know why. Sally fell hard for Liam at one point, but it was honestly a pretty brief crush and it’s ancient history by now. She hasn’t been in Liam’s orbit lately and has no chance with him as long as Hope Logan (Annika Noelle) and Steffy Forrester (Jacqueline MacInnes Wood) are around.

However, Wyatt’s already been battling feelings for Florence “Flo” Fulton (Katrina Bowden), so even the slightest slipups are going to add to “Wally’s” problems. The Bold and the Beautiful spoilers say Wyatt will remind Sally of her connection to Liam, so she’ll admit she did have feelings for him back then. Sally will acknowledge that Liam lit up her life when she was in a dark place, but things have changed.

B&B fans can expect Sally to gush over Wyatt and how much she loves him. She’ll argue that Wyatt is the sun, the moon and the stars as far as she’s concerned. Wyatt is her everything – and her fiance – so Sally will hope that they can get past this minor mistake.

When Wyatt still seems uneasy, Sally will wonder if he’s trying to break up with her. Wyatt will insist he’s done chasing after Liam’s women, so it’s clear that Sally’s blunder will really leave him on edge. The Bold and the Beautiful spoilers say Sally will try to prove how serious she is. She’ll contend that she’s ready to marry Wyatt right away, so she’ll suggest jetting off to Vegas for a quick elopement.

Wyatt will shut down that idea, but Sally will just want him to know that her slip of the tongue was meaningless. She’ll assure Wyatt it was an innocent mistake and nothing more. The Bold and the Beautiful spoilers say they’ll kiss and make up, but Wyatt will still look worried about what the future holds! We’ll give you updates as other B&B news comes in. Stay tuned to the CBS soap and don’t forget to check CDL often for the latest Bold and the Beautiful spoilers, updates and news.