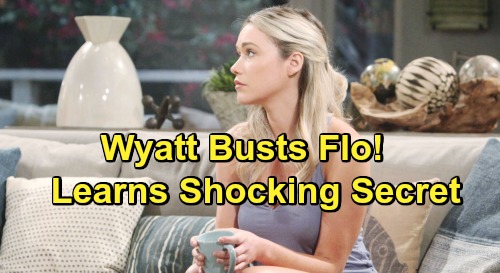 The Bold and the Beautiful spoilers tease that Wyatt Spencer (Darin Brooks) will be in for a big shock. He’s been enjoying his summer romance with Florence “Flo” Fulton (Katrina Bowden), free of all the deception that he experienced with former love Sally Spectra (Courtney Hope).

Wyatt just couldn’t get past Sally’s secret-keeping, and so he promptly broke things off with Sally and began a new relationship with Flo, who he credits with being very sweet, honest, and trustworthy.

Little does he know that Flo is keeping a doozy of a secret of her own…not only does she know that Beth Spencer is alive and living as Phoebe Forrester (River Davidson and Madeline Valdez), but she falsely posed as Phoebe’s birth mom.

Further, Flo is aware of the contributing role that Thomas played in Emma Barber’s (Nia Sioux) death. While most people are under the belief that Emma’s death was accidental, Flo knows that Emma was on her way to tell Hope all about Beth’s existence when Thomas rushed her and helped drive her off the road. Those are some big secrets – imagine what Wyatt would think if he knew the truth!

Well, according to The Bold and the Beautiful spoilers, Wyatt will soon learn a disturbing fact about his beloved Flo. Wyatt will be approached by Liam after Liam overhears Thomas and Flo arguing. Liam will have heard Thomas and Flo discussing a big secret that involves Hope, and he’ll want to get to the bottom of what those two are hiding.

Liam will ask for his brother’s help and discretion in getting to the bottom of this big secret between Flo and Thomas, and Wyatt will agree, but he’ll be shaken by the fact that Flo is keeping secrets. It just won’t jive with what Wyatt has long believed about Flo…that she’s a sweet, honest person who wouldn’t hurt a fly.

It looks like Wyatt will agree to do a little sleuthing where Flo is concerned and seek some information about her. He’ll initiate a conversation with Flo about her past, but The Bold and the Beautiful spoilers say he’ll be stunned when she reveals a piece of shocking information about her background. Exactly what she reveals remains to be seen, but it appears to be something that she’ll let slip that she shouldn’t have.

Keep in mind that Flo is supposed to be someone who got pregnant by a man who didn’t stay in the picture, and she is supposed to have given birth at some point to “Phoebe.” It’s possible that she might bumble the details and give Wyatt some information that doesn’t mesh with the story she’s supposed to be telling.

We’ll see exactly what Flo ends up disclosing, but B&B spoilers say that she’ll have to quickly cover, and that’s going to arouse some suspicion in Wyatt. He’ll likely be shocked by what he hears and even more shocked to realize that Liam might actually be onto something and Flo might have some terrible secrets.

At any rate, look for Wyatt to get awfully suspicious of Flo as he helps his brother get to the bottom of what’s going on. It certainly looks like Liam’s going down the right path to eventually uncover the baby swap and adoption scam that Reese Buckingham (Wayne Brady) set in motion and Flo participated in.

Wait until Wyatt learns what Flo did! Do you think there is any chance for a Wyatt and Flo romantic future after her role in the Beth baby swap is revealed? Stay tuned to the CBS soap and don’t forget to check CDL often for the latest Bold and the Beautiful spoilers, updates, and news.