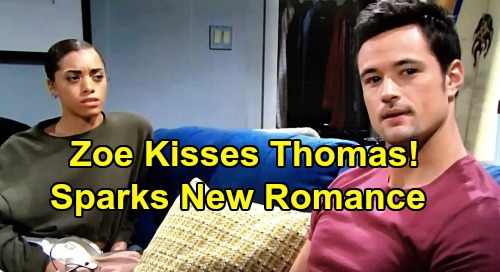 The Bold and the Beautiful spoilers tease that Zoe Buckingham (Kiara Barnes) will take a big risk. As B&B viewers know, she recently reconnected with Thomas Forrester (Matthew Atkinson) after they spotted each other at his buddy Vinny Walker’s (Joe LoCicero) apartment building. Zoe was temporarily subletting an apartment there, with little prospect for a good job or even a place to live down the line. So Thomas invited her to move into Vinny’s, which she promptly did.

Since Vinny is now staying with his girlfriend out of town, that leaves Thomas and Zoe together in the apartment…alone. And according to B&B spoilers, the two will be getting much closer very soon. They may seem like an unlikely couple, given their history with keeping the secret about Beth Spencer (River Davidson and Madeline Valdez) and all of Thomas’ threats against Zoe and Xander Avant (Adain Bradley) in the past.

But things have really changed in both Zoe’s and Thomas’ worlds. Zoe now has no one on her side. As B&B viewers will remember, she lost both her job at Forrester Creations and her relationship with Xander when the Beth secret came out. Plus, her dad Reese Buckingham (Wayne Brady) was sentenced to prison, so he’s out of her life, too. Zoe needs somewhere to turn, and Thomas happens to be there.

Of course, it only helped that Thomas threw a little flattery Zoe’s way. He recently told Zoe that he was designing again, and that she was the inspiration for his recent creations. He also promised Zoe that she’d likely be able to return to Forrester Creations again someday, since he was the future of Forrester and would soon have clout and decision-making power at the fashion house. That probably sounded pretty good to Zoe, so it makes sense that she’d align with Thomas now.

And Thomas needs an ally and a friend as well. Vinny’s friendship only goes so far, plus he’s off staying with his girlfriend now. Thomas needs Zoe’s inspiration and friendship as much as she needs his, so in many ways it makes sense that they would gravitate toward each other. They share similar ambitions, and they’re both kind of down-and-out right now and need to make a big comeback.

Well, The Bold and the Beautiful spoilers indicate that Zoe will do more than just stick by Thomas’ side. They’ll be living in close quarters now, and it seems that they’ll get closer in more ways than one. They’ll even share a kiss, which Zoe will initiate. We’ll see if Thomas reciprocates the kiss, but B&B buzz says it’s likely, given that he recently commented on how attractive Zoe is.

Of course, there’s also the issue of Thomas’ feelings toward Hope Logan (Annika Noelle) to consider here, which could make him wary about embarking on a fling or a relationship with Zoe. But then again, Thomas seems to know at this point that Hope isn’t going to want him under pretty much any circumstance. In many ways, it would make sense for him to get involved with Zoe right now – she could be his muse and so much more!

And together, Thomas and Zoe could do quite a bit together at Forrester Creations. Once Thomas gets back into the fashion house, which seems inevitable at this point, he’s going to need a top model to show off his fashions. It doesn’t seem like he’d have too much trouble talking Ridge Forrester (Thorsten Kaye) into re-hiring Zoe, especially considering that Ridge seems to have totally forgiven Shauna Fulton (Denise Richards).

Thomas and Zoe could wind up being quite a force to be reckoned with at Forrester Creations down the line. Zoe was once a top model there, and she’d love to get back to that status again. If she sticks with Thomas, she could benefit, and he’d benefit by having his muse handy at all times. It would be a win-win for both of them.

Do you think Thomas and Zoe could become Forrester’s new power couple or will they crash and burn? Stay tuned to the CBS soap and don’t forget to check CDL often for the latest Bold and the Beautiful spoilers, updates, and news.