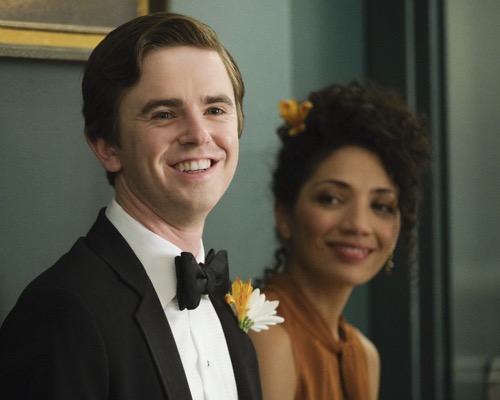 Tonight on NBC their new medical drama “The Good Doctor” airs with an all-new Monday, October 14, 2019, episode and we have your The Good Doctor recap below. On tonight’s The Good Doctor season 3 episode 4 called, “Take My Hand” as per the ABC synopsis, “A conspiracy theorist questions Dr. Neil Melendez about his liver damage; and Dr. Claire Brown treats a woman whose inability to feel pain is threatening both her marriage and her life.

Aaron and his soon to be wife sit and wait before they are called in to marry. The more and more they talk, he realizes that they don’t know a lot about each other. He gets up. He tells her he doesn’t feel good and he cant do this.

Claire and Morgan run an MRI on a female patient. They realize that she lacks emotions when the areas of her brain connected to emotions do not react after asking her questions about her mother and husband. When they take her out of the MRI they discover she has a rash on her hands. They bring her back to her room where they talk to her and her husband. They explain that she cannot feel pain, physically or emotionally. They are going to bring her into surgery.

Aaron’s fiancé finds him hiding in another room. She asks him if they plan to marry or not. Why would he humiliate her by asking her and then runoff? He tells her about his worries – they don’t know one another. She tells him all the ways they are good for one another.

In surgery, Claire and Morgan realize there is more necrotic tissue in their patient’s hand than they thought. She is going to lose it.

Sean and his date sit on the couch for a movie. He tells her he doesn’t want to hold hands. It makes him uncomfortable. She explains what holding hands signifies. They try again but Sean drinks back, looking uncomfortably again.

Post-op, Claire, and Morgan talk to their patient about the loss of her hand and how she needs to check her skin for changes. The patient takes it well.

Sean is selected by a patient to be the only one to care for him after the patient accuses the hospital of trying to kill him. He is one who believes in the conspiracy and is against the government. His liver is failing and he thinks Sean is the only one who can tell him the truth.

The patient who feels no pain is questioned by her husband in front of Claire. He wonders if she even cares. Would she care if he died? Did she care when they miscarried? He didn’t realize they weren’t carrying the load together. He needs to leave for a while to think. Later, they find the patient upset.

Sean talks to his patient about the herbs he takes. He learns that the natural herbs aren’t actual natural. He has been poisoning himself. The man is speechless before calling the makers communists.

Claire and Morgan talk to their patient’s husband, explaining that she isn’t doing well before asking him why he would leave after so long. They were happy together for years.

Sean and Aaron talk over coffee. Aaron admits he didn’t get married. He chickened out. He asks Sean for advice. Afterall, his first wife said he was impossible. Sean doesn’t know what to say only that Aaron implied he would have a second wife by calling his ex-wife his first wife. It seems he has made up his mind. This gives Aaron something to think about. He runs to his fiancée and asks her to go to city hall.

Morgan and Claire hit the town to have some fun while their patient and her husband get ready to go home, together.

Sean and his girlfriend attend Aaron’s wedding at city hall. Meanwhile, Claire and Morgan bond allowing Claire to let some of her hardships go.