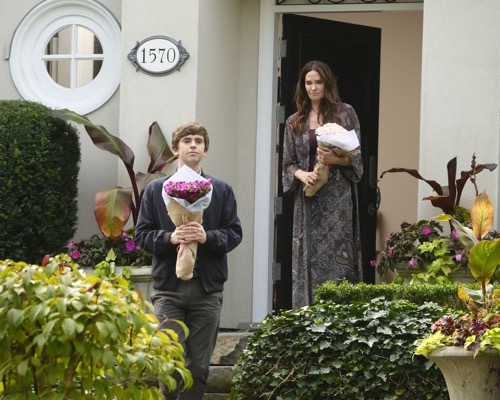 Tonight on NBC their new medical drama “The Good Doctor” airs with an all-new Monday, November 25, 2019, episode and we have your The Good Doctor recap below. On tonight’s The Good Doctor season 3 episode 9 called, “Incomplete” as per the ABC synopsis, “Shaun is ready for the next step in his relationship with Carly. However, he continues to struggle as they grow closer and more intimate, and is dealt with some troubling news about a deeply personal issue. Meanwhile, a young patient must decide on a treatment that could save her life or possibly destroy her marriage.”

Claire spent the night with a nice guy. He was great in bed and he even cooked her breakfast the next morning, but she was still a little hungover from the night before. Claire had needed time to rest. She, therefore, couldn’t truly appreciate a nice guy in front of her. She simply wasn’t in the right frame of mind for it and so she all but kicked him out of her apartment. It was a little awkward. Not that she minded because she had needed coffee and so she thought, after everything, that would be the last time she saw the guy.

Then she went into work where she ran into the guy again. Her Mr. Charming had gotten into a nasty accident and she was assigned his case. Claire technically shouldn’t have even been working on him. She did sleep with the guy and that might get in the way of her treating him, but Claire didn’t want to tell anyone what happened. She instead buried the one-night-stand and moved on. Claire treated her patient like anyone else and it was going fine until she heard he had a wife. The wife was coming in to make life-altering decisions for her comatose husband and no one knew what this was doing to Claire.

Claire felt dumb. She had been played by a guy that she thought was nice and now she was dealing with both his wife as well as his young daughter. Again, with no one knowing what she was going through. Claire was feeling like sex had ruined her life and funnily enough, all anyone could talk about at the hospital was sex. Even Shaun was discussing sex. He was ready to consummate his relationship with Carly and it announced it at her place of work. Shaun also tried to talk to Morgan and she was quick to shut the conversation down.

Morgan said it wasn’t appropriate to talk about at the hospital, but she and Shaun’s patient had basically demanded that they talk about sex. Their patient Jeanie has a tumor in her clitoris. It was being triggered every time their patient had sex and so it could lead to her death. Both Shaun and Morgan advised that she have surgery to remove the tumor. It would also take away her clitoris and it would mean she could never have sex again. The doctors said that was the only way to protect her and so Jeanie thought about it. And she eventually decided not to go ahead with the surgery.

Jeanie didn’t want to give up her sex life. She was newly engaged and she wanted to be intimate with her fiancé. She didn’t care that it might kill her. She was willing to take that risk and so it was Morgan that got upset. Morgan thought her patient was being ridiculous. She thought no relationship should be dependent on sex and she wanted Jeanie to see a counselor. Only Jeanie wouldn’t do it. She refused to seek help and so Morgan blames it on the fiancé. She told him that he was being selfish by not saying something and she reminded him that his soon-to-be wife could die just to please him.

Morgan thought sex was selfish. Shaun thought it could be new and exciting and unfortunately, he never made it that far with Carly. They were getting started and then out of nowhere Shaun shut down. Shaun later talked about it with Glassman. He said that he stopped because he saw half a heart on Carly and thought an unfinished tattoo didn’t make sense. Shaun believes this tattoo was what stopped him from being intimate and Glassman meanwhile thought Shaun was using the tattoo to hide from intimacy.

Glassman suggested that Shaun overcome his fears. The tattoo wasn’t the problem and no he couldn’t ask his girlfriend to remove it. Carly is a great woman. Her tattoo and whether or not she wanted to keep it was her business. Not Shaun’s. Shaun has to accept her as she is and honestly talking to Jeanie had helped him. Jeanie made him see that having sex left someone vulnerable. Shaun has to allow himself to be that vulnerable and so he was rethinking his own actions at the same time Morgan was opening up to Jeanie’s fiancé.

Morgan told the guy that sex wasn’t the end-all. She had the perfect guy at one point and she ruined the relationship because she drunkenly had sex with someone else. That’s why Morgan thought sex made people stupid. She didn’t think someone deserved to die over it and so she convinced Jeanie’s fiancé to lie to her. The fiancé spoke to Jeanie and he told her he loved her more than sex. He even got her to take the surgery and so Jeanie’s life was saved. Her relationship and possible marriage may come under some strain later on, but for now, she’ll live.

Claire, however, had tried ignoring her one-night-stand. She didn’t want to be around him and so she ignored until the last possible moment in which he confronted her. Claire had checked out the guy before she took him home. She had looked at his ring finger and he felt that enough to tell her he was married. Her supposedly nice guy had called them both cheaters, but he was wrong. He was the one that married and she wasn’t. She wasn’t to blame for what he did. She also noticed that he had a blood clot while they were arguing and so she saved his life.

It was almost too late for his leg, but she saved his life and she was forced to confront the fact she wasn’t okay. She was going through something. She needed to deal with it in order to become the great doctor she used to be and she also let his wife know that it was okay to push him for answers. He did need to explain why he was across town when he shouldn’t have been. Claire dealt with her issues and Shaun was struggling with his. He was told Glassman that he had to deal with some of these things by himself and that meant he could turn to his old friend when he realized it wasn’t the tattoo that stopped him.

Shaun’s biggest fear is that he’ll be alone. He thought if he didn’t get over this that Carly might leave him and so she showed him that they didn’t have to have sex. They could just hold each other if that’s what they want. And sadly, Shaun couldn’t even do that because he has his own thing that he’s working through.

…and Shaun’s mother called to tell him that his father was dying from cancer.