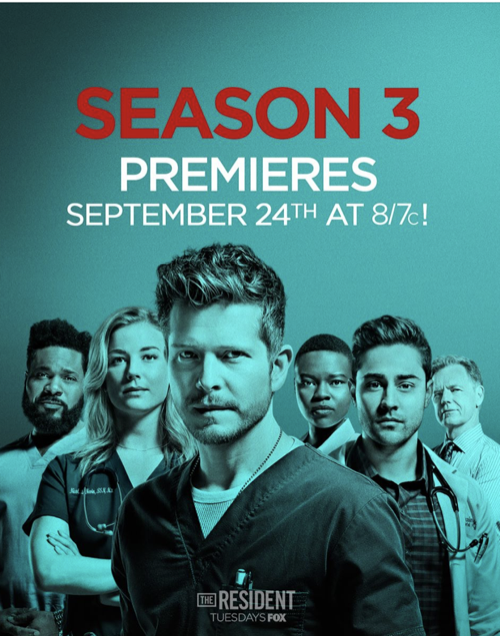 Tonight on FOX their new medical drama The Resident airs with an all-new Tuesday, September 24, 2019, episode and we have your The Resident recap below.  On tonight’s The Resident season 3 episode 1 premiere, “From the Ashes”  as per the FOX synopsis, “The doctors of Chastain are surrounded by new rules and doctors, as Red Rock Mountain Medical takes over the hospital. Conrad finds himself in a dangerous situation when the construction for a new neurosurgery center causes a gas explosion at Chastain.

Meanwhile, new hotshot neurosurgeon Barrett Cain (Morris Chestnut), is put to the test with a complicated surgery and Mina acts as a support for Nic, who is struggling with a devastating loss.”

The Resident season 2 episode 23 airs at 8 PM – 9 PM ET on FOX. Make sure to bookmark this spot and come back for our The Resident recap! While you wait for the recap make sure to check out all our television recaps, news, spoilers & more!

Nick lost her sister. Jessie Nevin was supposed to get a kidney transplant from their father Kyle and unfortunately, Kyle waited too long to come to the rescue. The time he spent playing around was vital to Jessie. She was dead now because of it. Jessie had deserved better and Nic couldn’t move on from her sister’s death because she knew this wasn’t supposed to be how Jessie’s story ended. Its why Jessie’s death hit her so hard. She didn’t even know if she could return to work because she wasn’t sure if she could go back to Chastain.

Nick couldn’t even enter the hospital for Jessie’s post-op. She left it for her father to handle and this was despite knowing how bad he was with officials. Kyle’s newest scheme was a possible lawsuit. He wanted to know if he could sue the hospital over Jessie’s death and Nic’s disgust might not be enough to stop him this time. What she should have done was go with him. Nic chose to stay out of it and she didn’t know anything was wrong until she heard the explosion from the hospital. Chastain suffered an explosion in its basement.

There was apparently a gas leak that was left untreated. Annie, who works down there, was doing maintenance when Conrad of all people had surprised her. He told her that he was looking for a missing boy by the name of Jonah and that Jonah was last seen going to the basement. It turns out the kid ran off to explore when his mother wasn’t looking. So, Annie was helping Conrad look around for the boy when something set the leak-off and the whole basement caught on fire. Annie suffered a leg wound, the boy was knocked unconscious, and Conrad was the only one that could do something.

Conrad called for help. The firefighters had to break down a door just to reach all three of them and their timing might not be enough for the three injured persons. Conrad was hurt bruised all over, Jonah was suffering a spinal cord injury, and Annie had to be rushed into surgery. Then there was Bell. Bell was in the middle of a meeting with the new healthcare conglomerate that bought out the hospital. He really didn’t need things exploding underneath his feet and he was the probably the first person to point out that Jonah’s family has a possible lawsuit.

Jonah was suffering from what the doctors called internal decapitation. His head was literally separated from his spine and it took an x-ray for the doctors to figure that out. Dr. Voss knew she would have to reattach the boy’s head by opening him up. She planned out her surgery beforehand and slowly made inroads into attaching the head back one. It was after she was done that Bell finally breathed easily again. Bell wanted to celebrate Voss and it turns out her contract was up for renewal.

This conglomerate didn’t care about the doctors already at the hospital. They cared about the doctors that brought the money in so they pushed Bell into meeting with this Dr. Cain. Cain was basically a black version of Bell. Well, Bell in his glory days. Cain was efficient and he could potentially bring in eighty million dollars. It was imperative that Chastain rope this guy and so Bell was the best person to do it. There was no one else that could bring out the Charm like Bell or the b.s. factor-like Bell.

Back at the hospital, the only one that seemed to be fine with the explosion was the conglomerate. Red Rock Mountain Medical was going to get a big fat insurance check after this and it was being joked about that they might have blown up the proton beam themselves just for that check. There were some though that weren’t in the mood for jokes. Nic was still reeling from his sister’s death and seeing Conrad so sick had upset her. She couldn’t lose anyone else. She kept a close eye on him and didn’t even want him treating anyone.

Only Conrad wanted to be there for Annie. She went through an explosion and a life-saving surgery. Conrad simply wanted to be there when she woke up. He didn’t think he would symptoms of something else and so he had to ignore Nic’s pleas on taking it easy. Conrad knew he needed to get a brain scan of Annie. She was still seeing things long after the moment had passed and it turns out she also had a brain tumor to contend with. The tumor was there before the explosion. It was likely playing havoc on her motor skills and this might very well explain why the explosion happened.

Conrad didn’t think about that part. He focused in on Annie who was a friend and he watched over her as she went back into surgery. This time for her brain tumor. Annie was being operated on by the newest doctor, Dr. Cain. Cain was being talked up by Bell so no one knew what to expect from him and it was only by chance that Cain was good. He performed the surgery in under five minutes. Cain then left it up to a resident he didn’t know from Adam to close her up and it didn’t seem like he cared about what happened.

Cain was sort of blasé about the patients. He didn’t really see them as people and that could be why he bills so much. Thankfully, he did do his duty by Annie. He removed her tumor and broke the news to Annie when the pathology report said she has Stage 4 cancer. Cain told her to be positive, but that was a sell from him and again he didn’t care. He was throwing a party to welcome himself at Chastain. He only invited the most important doctors and therefore the richest. And so Bell was bring Voss with him.

Bell wanted Cain to be beside him when he advocates for Voss’s job. She wasn’t billing as much as she could have and the conglomerate thought they could replace her. Voss wasn’t the usual type to fawn over anyone. She tried and all she did was alienate Cain. Voss later told Bell that she hates guys like Cain and Bell pretended not to understand what she was talking about. That is until Cain offered him a woman for the night and said that they could do wonderful things together.

Miles away from this pimp in training, Nic decided to finally let go of her sister’s ashes.

She didn’t know that her father gave Conrad Jessie’s file or that Kyle wanted Conrad to determine if everything was done to save his daughter.